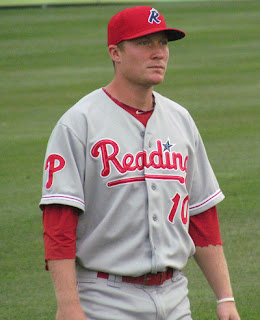 Third baseman Cody Asche made a major impact in the Phillies developmental ranks in 2012 and became one of the team's fastest rising prospects during his first full season as a professional.  Selected in the fourth round of the 2011 amateur draft out of the University of Nebraska, Asche is among a small group of talented prospects that could be contributing at the big league level in the near future.

The 6-foot-1 180-pounder began his professional career playing second base with the short-season Class A Williamsport Crosscutters in 2011.  There he batted .192 with 11 doubles, two homers and 19 RBI in 68 games.  His .537 OPS was considerably low and did not garner Asche much recognition.  The lefty batter then spent time at the Florida Instructional League and worked closely with Phillies hitting coach Steve Henderson, who was the Phils' roving minor league batting instructor at the time, and made some necessary adjustments to improve his approach.

Having played third base through college, Asche got the chance to move back to the position at which he feels most comfortable in spring training last year.  Asche would then impress coaches and showed that he had made so much progress that organization brass assigned him to Class A Advanced Clearwater, allowing him to completely skip Class A Lakewood.

Armed with a quick bat, Asche posted a .349 batting average with two home runs and 25 RBI in 62 games, while being honored as a Florida State League All-Star with the Threshers last year.  In late June, he was promoted to Double-A Reading and got off to a cold start, going 14-for-86 (.163 avg) in his first 24 contests with Reading.  Following that difficult stretch, the 22-year-old then posted a .367 batting average for the remainder of the regular season.  He also showed more power in the Eastern League, collecting 20 doubles, three triples and 10 homers in 68 games.  Asche's 168 combined hits at the two levels were fifth most in the minors last year.

The Missouri native then spent time during the off-season, playing with Peoria in the Arizona Fall League, where he represented the Phillies in that league's version of an All-Star Game, the Rising Stars Game.  In 24 contests in the AFL, Asche sported a .281 average with 11 doubles, one home run and 12 RBI.

The youngster walks a fair amount (.369 combined on-base percentage last year), but being a bit more selective at the plate will certainly benefit Asche as he continues to climb the ladder.


Defensively, Asche, who ideally would like to model his game after Hall of Famer George Brett, has quick hands, very solid range and a strong arm.  He made improvements in all facets of his game during the 2012 season that impressed his manager with Clearwater, former big league third baseman Chris Truby.  The 39-year-old skipper recently stated that he feels Asche will be a very good third baseman in the Major Leagues.

On the bases, Asche won't scare many opposing batteries, but is smart and is quite capable of contributing with the occasional steal, as he swiped 11 bags last year in 14 opportunities.

Asche, who is among the most focused and determined prospects you might come across, credits a lot of his progress to Henderson.  Asche's goal is to follow the recently promoted "Hendu" up to the big leagues and that opportunity could surely come sooner than later, if Asche continues to progress at the same pace he did last year.