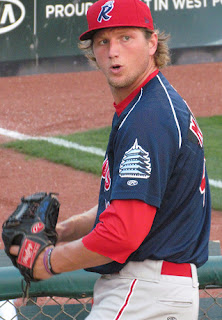 Acquired from the Dodgers in the trade that sent Shane Victorino to LA last summer, Ethan Martin quickly showed why he was regarded as a fast rising pitching prospect, as he helped the Double-A Reading Phillies reach the postseason and posted great numbers in a short period of time.

Originally selected by Los Angeles in the 1st round (15th overall) in the 2008 amateur draft out of Stephens County High School in Georgia, when scouts weren't sure if he would proceed as a pitcher or a third baseman in his career, Martin had not posted great numbers as a professional prior to last season.

The following season, the six-foot-two 195-pounder had a difficult time, posting a 9-14 record along with a 6.35 ERA and a .279 batting average against in 25 games (22 starts) for Inland Empire of the Class A Advanced California League.  In 2011, Martin split his time between the California League and the Double-A Southern League, putting together a 9-7 record and a 5.95 ERA in 37 games (12 starts).

Last year, in a return campaign with Double-A Chattanooga, Martin began to show why he was such a high pick, as he tallied an 8-6 record with a 3.56 ERA en route to becoming a Southern League All-Star.  Following his trade to the Phillies, Martin looked unbeatable, posting a 5-0 record with a 3.18 ERA and a .206 batting average against in seven regular season starts for Reading in the Double-A Eastern League.

The 23-year-old also pitched extremely well for Reading in the EL playoffs, striking out 11 batters while walking none over 7 1/3 innings in a loss to Trenton, in which he surrendered three runs (one earned).

Armed with a fastball that regularly registers 93-94 MPH, but can reach up to 97 and higher, a very good slider and a plus curve ball, Martin is primed to become a hurler that the Phillies could count on in the near future.

The area that has posed the greatest challenge for Martin, who grew up as a Braves fan, has been his control, but he seems to have overcome those struggles.  Walks had been an issue for Martin and he improved the amount of free passes he would issue last year, lowering his walk % from roughly 15 in 2011 to 12.1 in 2012.  There is certainly still room for improvement there, but Martin is heavily focused on continuing to improve that aspect of his game and has a strong focus on doing everything in his power to step his game up and improve his skills with each outing.

Overall, Martin has steadily notched strong strike out numbers through his time in the minor leagues, averaging 9.18 K/9 in four seasons.

Look for Martin to possibly begin the 2013 season at the top of the Double-A Reading rotation with a likely step or two upward in the not too distant future.