Chris Duffy Talks About Being Cut by Phils 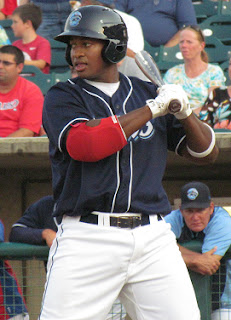 In recent days a prospect that had considerable buzz about him last season, Chris Duffy, was released by the Phillies.  Billed by many coaches within the system as a very good hitter, the 26th round draft choice in 2010 out of the University of Central Florida had an outstanding season in 2012 with the Class A Lakewood BlueClaws.  In 60 games in the South Atlantic League the lefty batting slugger sported a .384 batting average with 11 homers and 56 RBI.  Additionally, in two different stints with Class A Advanced Clearwater last year, Duffy sported a .236 average with two home runs and 15 RBI.

Credited by prospects like highly regarded third baseman Maikel Franco with being an inspiration, the 25-year-old Duffy built a reputation of being a leader among toward players.

Now, faced with free agency, the well-mannered and steadily lighthearted spoke this week about the circumstances surrounding his release,


- Okay, so clearly there was some big news that surprised some people on Sunday morning, when the Phillies released you.  After a year in which you posted absolutely great numbers in Lakewood and really bounced back during your second trip to Clearwater, this wasn't something that was expected by fans.  Did this catch you completely off guard?  Any other thoughts on this, as you reflect back on it?

Yes, it absolutely did catch me off guard.  Usually, players don't get released after a good season, so I figured I was clear of all that.  Especially since I had been hitting well in spring training and came in shape.  But everything happens for a reason and even if I don't understand yet I will.  I just view it as something I have to go through to achieve my dream.  I'm a firm believer that I am limitless and can accomplish anything I want as long as I go get it. This definitely hurt, but it's not going to stop me!


- How was the news brought to you?  Who spoke with you and what reason was given?

Actually, I thought I was clear because I walked past the coaches at the entrance that usually pull people aside as they come in the locker room. I walked right by them and they said hello to me.  (Laughter)  Then I went to my locker and my name plate was up still and everything was normal, so I had none of the symptoms of a player getting released.  I changed in my Phillies gear from my street clothes and sat down to eat my breakfast with my headphones on and music jamming and as I was about to dig into my eggs and grits with cheese. Then I get a tap on the shoulder saying (Phillies director of player development) Joe Jordan wants to see me.  So, I went upstairs to his office and Gauntlett (Eldemire) was waiting outside his office and he looks at me like, "This can't be right."  (Laughter) I was like, "Okay, you're one of the fastest players around and I can hit the ball pretty dang far so, what the (hell...)?

Anyways, Joe Jordan took me in there after Gauntlett and told me that the organization loves what I've done and he admires me as a person and all but they made some last minute trades at first base and they feel it would be best for my career if another team picks me up, which actually makes sense if you look at the big picture.

- Right, so you stated there that first base is a crowded position in the minors for the Phillies.  Thoughts on that?

That's the reason I got released, 'cause it's clogged and there is no DH and they haven't tried me in the outfield or third. Not a bad thing for me actually.


- I heard from a Phillies writer that's down there and his thought was that you showed up to spring training less fit than you had been last season.  Is that the case and, if it is, somewhat, do you think that could speak volumes toward a team's decision to part ways with a guy?


My answer to this right here is I squat the weight of a baby elephant. (Laughs) I passed all my times the Phillies had and I'll be happy to show your buddy my six pack I have brewing after training this whole off season. (Laughs).  Tell him to come to the beach and watch me flex.  (Laughs)

- If you knew over the off-season what you know now, is there anything you would have done differently in the months or weeks leading up to the release?
Nothing different! I believe this happened for a reason.

- I see you talking about "Above .500" on Twitter.  What can you tell me about that and how that's going to help you going forward?

Above .500 is an upcoming organization that myself and some friends started to encourage people, especially young ones, to go after their dreams in life and don't let anything stop them.  We do this using motivational speaking and mentorship. We throw events we call "Dream Rallies" at middle schools and high schools, talking to the young ones about the pursuit of their dreams. During the pursuits there will be failure, obstacles, and challenges. If you don't give up, stay positive and believe we can accomplish anything we set our minds to...(what is happening to me) is a prime example of it.  Because my release from the Phillies doesn't mean it's over but it's just a hurdle I have to jump over to get to my dream.

The name originated from the Giants who won the Super Bowl one game Above .500 winning percentage.  So, no matter how many losses in life you encounter or what your situation is today you can still be a champion tomorrow. You can learn more about our non-profit organization at www.above500.org

joenose said…
When was the last time Dennis Deitch did any crunches other than Nestle's or Captain? He's got some nerve calling Duffy out of shape. What a Douchebag !!!!

Jay Floyd said…
OUCH! Looks like he's at it again today too, on Twitter, in regards to Delmon Young.

Honestly, I feel it's fair of a writer or analyst to remark about an athlete's condition. Different standards for a guy making big money to keep his body fit and perform physically. That would not apply to media.
March 22, 2013 at 3:01 PM