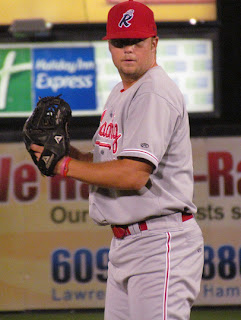 As minor leaguers break camp and three quarters of the teams head north to their full season destinations, I had the opportunity to speak with righty hurler Tyler Knigge.

The Phils' 12th round draft selection in 2010, took big strides last year, as he posted a 4-1 record, nine saves and a 0.60 ERA in 34 outings for Class A Advanced Clearwater, en route to becoming a Florida State League All-Star.  The six-foot-three 225-pounder then earned a promotion to Double-A, where he tallied a 2.92 ERA with no decisions and two saves in 21 appearances for Reading.  Additionally, Knigge, who sports a fastball that is regularly clocked in the mid-90's, averaged 9.09 K/9 at the two levels.  He went on to pitcher with Peoria in the Arizona Fall League last year as well.

This weekend, Tyler offered some quick thoughts on his preseason, his assignment to begin the regular season with Reading and more.  Read ahead to check out the interview.


- How has your spring gone?  Thoughts on how you've progressed physically? Any spring training goals met?

My spring has gone well. Had my ups and downs but that's what spring training is for. Fixing the kinks. Physically, I know I've gotten stronger. That's my goal and I will continue working towards it.


- Early on in spring, a less than ideal outing might not be evaluated the same as one later in spring. Is there any added pressure, as spring winds down, to put forth an exemplary or shutdown effort out of the bullpen?

In spring training, you're always fighting for a spot. Each outing is just as important as the next. I treat each outing as the most important outing I've ever had. Even if it might not mean as such.


- Last year you got the call to spend time with the big league team during some spring games. You didn't get the same opportunity this year. Is that something that you've given thought to and can that type of thing cause a guy to worry about his spot?

I did spend time on big league side. This year I haven't, due to a hamstring injury. I'm 100% now, but they weren't going to send an injured player over to get hurt again. My job was to get healthy before camp ended.


- I know you mentioned in an off-season interview that you felt like reaching the big leagues in 2013 was not out of the question. Is there anything different for you this spring than others, as far as preparation or what you've worked on, which might help reach that ultimate goal?

That is my goal. You gotta dream big. And I've kept the same work ethic as last year and have prepared myself the best I can to achieve that goal.


- What are some of your favorite things to do during your free time during spring training?

I love hoppin' on the sticks, playing video games, especially Call of Duty. It's a good time to wind down and enjoy the afternoons without any distractions.


- So, now you're off to Reading.  What's the outlook as you return to Baseballtown?

Yes, that's where I'll be this year and I'm definitely going to make the most of it.