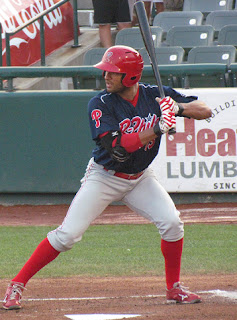 Phillies outfield prospect Tyson Gillies is a very skilled player that has had some well documented ups and downs in recent years.  Being traded, bouncing back from several injuries and a return from a suspension have induced plenty of emotion from the lefty batter, but an opportunity to play for his home country of Canada in the World Baseball Classic has the Vancouver native more excited about the game than he's been in some time.

"It's always a dream come true to represent your country, doing something you love," Gillies said from Team Canada's training facility this week.  "The excitement level has been through the roof for everyone out here in Arizona."

The 24-year-old, who plays with a hearing impairment, has experienced some considerable injury issues since the Phillies acquired him in the 2009 trade that sent Cliff Lee to Seattle.  A recurring left hamstring ailment, a troublesome foot problem and a concussion that forced Gillies to miss six weeks of action following a collision in the outfield last year have limited him to 106 games in three seasons in the Phillies organization.  Additionally, he was arrested for drug possession in 2010, although those charges were dropped.  And last season, Gillies was suspended by the Phillies for violating team rules following a non-physical confrontation with the Double-A Reading Phillies bus driver.  The arrest and the bus outburst were quite uncharacteristic for the 6-foot-2 205-pounder, as his behavior is typically on the exemplary side among his peers.

Expected to bat lead-off for Team Canada, Gillies, who was recently ranked as the Phils' 9th best prospect, performed well last year, when he was active, posting a .299/.369/.440 line with nine steals in 75 games during the 2012 regular season.

While the World Baseball Classic got rolling last week, the first round Pool D games, which feature Canada and the United States, will begin on Thursday, with each of the aforementioned clubs seeing their initial 2013 tournament action on Friday.

Armed with a solid bat, great speed and sparkling defense, Gillies feels as though the chase for a world championship is extra special because he's doing it along side some Phillies teammates, including his close friend, righty hurler Scott Mathieson, another Vancouver resident that previously spent time in the big leagues with the Phils, and team manager Ernie Whitt, a Canadian Baseball Hall of Famer that is currently the Phillies' minor league catching coordinator.

"Mathieson, Phillippe Aumont, Jay Johnson, Pete Orr and John Suomi from the Phillies!  It's a great bunch of guys and Ernie Whitt has been great also.  He is a players' manager and you can't ask for anything better."

Of course, we wish Tyson and all of his teammates the best as they seek to dethrone two-time defending champion Japan.