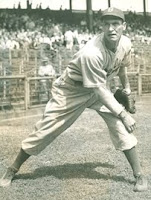 Curt Davis was a pitcher with the Phillies from 1934-1936. Davis was picked up by the Phillies in the 1933 Rule 5 draft, from the Pacific Coast League's San Francisco Seals, after stringing together 5 consecutive 20-win seasons. Davis would prove to be be quite a bargain for Phillies owner Gerry Nugent.

In 1934, as a 30-year-old rookie, Davis started 31 games with the Phillies and won 19 games while posting a 2.95 ERA. He lost 17 games that season, however, but as his ERA, which was third best in the National League, would indicate, he deserved a far better fate. In 10 of those losses, the Phillies, who went 56-93 that season, scored just 1 run or less.

Davis, a Missouri native, got off to a slow start in 1935, winning just 1 of his first 6 starts. He rebounded quickly to win 7 of his next 8 starts, which included back-to-back shutouts of the Reds and Braves in July. He would finish the season with a 16-14 record, a 3.66 ERA and 19 complete games.

Davis kicked off his 1936 season with a 4-hit shutout against the Braves, but won only 1 of the 7 starts that followed. Trade rumors began to spark up and, in May, Davis was sent to the Chicago Cubs along with outfielder Ethan Allen for Chuck Klein and sometimes-pitcher/occasional-outfielder Fabian Kowalik. Klein had been the National League Most Valuable player in 1932 as a member of the Phillies, but was sent to Chicago in a trade for 3 players and $65,000 after the 1933 season.

The right-handed hurler, Davis, would represent the Cubs in the all-star game in 1936. He posted an 11-9 record and a 3.00 ERA while completing 10 games in 19 starts with Chicago following the trade that season.

Exceptional control was a strong attribute for Davis, who twice had the lowest walks per 9 innings ratio in the National League. He walked just 479 batters in 2,325 Major League innings pitched.

His best season in the Majors would come in 1939 as a member of the Cardinals when he went 22-16 with a 3.63 ERA, 13 complete games and 7 saves. He would make his second all-star team that year.

By 1940 Davis pitched for the Brooklyn Dodgers and would later help lead them to the 1941 World Series, although he would take a loss in his lone start and the Yankees won the series. Despite not pitching in the Majors until he was 30, Davis managed to compete in 13 Major League seasons. He closed out his career pitching over 4 more seasons with Brooklyn.