By Jay Floyd November 23, 2010
Four of the Phillies' six minor league clubs will officially have new managers in 2011 after the Phillies announced on Monday that they have given promotions to Mark Parent and Chris Truby.

Parent, a former Major League catcher who played with the Phillies, among other clubs, will move up to Double A Reading. Parent, 49, managed the Class A Lakewood BlueClaws to a second consecutive South Atlantic League title in 2010 and then spent time as hitting coach with the Arizona Fall League's Mesa Solar Sox. The Autumn assignment could be more than busy work for Parent, who seems to be a likely candidate for the role of hitting coach at the Major League level in the coming years. 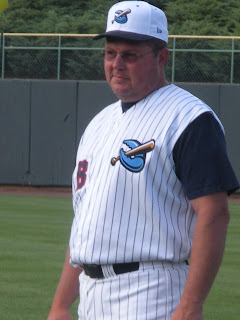 Speaking in an exclusive interview following Lakewood's title clincher in September, Parent seemed to be considerably focused on acquiring a big league spot. Replying to an inquiry about the potential realignment among the Phillies' minor league management positions, Parent stated, "The higher you get (in baseball), there's more on the line. I'm a Major League guy. I like the big leagues, (but) I'll do what (Phillies general manager Ruben Amaro Jr.) asks me to do."

Parent now has a mildly revised outlook toward the near future, as evidenced by what he told me Monday evening.

"I'm happy doing whatever the Phillies want me to do this season. You have a group of instructors (and) teachers of the game here that will do their very best job for the benefit of the organization," Parent said. "Last year in Lakewood couldn't have went much better in terms of growth in the young players, largely because of their commitment. I'm looking forward to going to Reading. Reading has long been the stop of many major league players, even a Hall of Famer or two. Hopefully, I can do my part in helping more players become contributing Phillies in the Major Leagues. The bottom line, though, is to develop players that want to win and know what it takes compete."

Truby, a 37-year-old, who played in the Majors with four teams, will follow Parent as the skipper in Lakewood. Truby spent the last two seasons managing the short-season Williamsport Crosscutters, and many of the players he led there should follow Truby upward in the system this coming year.

"I'm obviously very excited," Truby said, via a press release from the BlueClaws. "Lakewood is a place that everyone has rave reviews about and it's a step up for me, a progression in my career.

"You want to get to the point where you move up into a full season league. Going to Lakewood, where they've won two championships in a row and get the fan support that they do is exciting."

Last week, the Phillies hired Mickey Morandini to manage the Williamsport club. The 44-year-old Morandini, who has been coaching high school ball in recent years, has spent time as a guest instructor at spring training with the Phillies in the past. Morandini played 965 games as a member of the Phillies over parts of 9 seasons during his playing career.

Another addition to the Phillies' minor league rankings was Hall of Famer Ryne Sandberg, who also was once a part of the Phillies organization, as a player. Sandberg was of course traded to the Cubs after debuting with the Phillies as a 21-year-old in 1981. Sandberg will manage the Triple A level Lehigh Valley IronPigs.

High-A level manager Dusty Wathan will remain in place with the Clearwater Threshers, while Roly deArmas will return to manage the Rookie level Gulf Coast League Phillies in 2011.