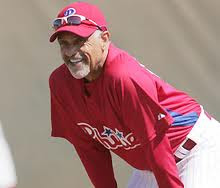 Another key piece to the Phillies' run of four straight National League East titles will be moving onward. According to CSNPhilly.com's Jim Salisbury, Phillies first base coach Davey Lopes will not be returning for the 2011 season. Lopes and the Phillies are far apart in a dispute over compensation, according to Lopes.

"We just had a difference of opinion on what I felt my worth was. That's all," Lopes told Salisbury. "It was a really tough decision because I loved my time in Philadelphia, I loved working for [manager] Charlie Manuel, and I have the utmost respect for everyone in that organization."

Lopes, widely considered a base stealing guru, helped the Phillies excel on the base paths during his four-year tenure coaching first base with the team. In each season with Lopes guiding their runners, the Phillies led the National League in stolen base percentage.

Lopes led the NL in stolen bases twice during his playing days in Los Angeles, in 1975 and 1976 and swiped 557 bags during his regular season Major League career. Lopes ranks second in Dodgers history in stolen bases, behind only Maury Wills.

Lopes, who lives in California says he will seek work with a team on the west
coast.

"I’m hoping something pops up. If I’m not in uniform next year, it
won’t be much fun," Lopes said.

Other 2010 Phillies who will be parting ways with the club, as they
approach free agency five days after the World Series ends, are JC Romero, who had his 2011 club option declined last week, Jamie Moyer, whose contract was through the 2010 season, Greg Dobbs, who elected for free agency last week, and of course Jayson Werth, who will be one of the hottest free agents on the market this off-season.