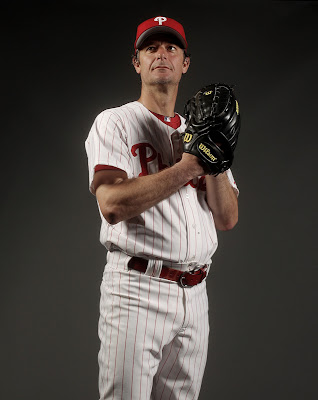 While pitching in the Dominican Winter League for the Escogido Leones on Saturday, Jamie Moyer was removed from the game after 2 1/3 innings with an elbow injury. Moyer, whose contract with the Phillies expired at the end of the 2010 season, had been sidelined with an elbow injury since mid-season.

Moyer was hoping to use his time in the Winter League to get in shape and showcase himself, in order to draw offers from clubs for another year in the Majors in 2011. Moyer, who will turn 48 years old in less than two weeks, has already pitched 24 years in the Major Leagues.

With the Phillies in 2010, Moyer posted a 9-9 record with a 4.84 ERA in 19 starts. In 3 Dominican Winter League games, Moyer held opponents to a .190 batting average and posted a 1.69 ERA.
Moises Alou, who is the general manager for the Leones team, told reporters that he felt Moyer's pitching days were likely over, due to the severity of the injury. Such a diagnosis is obviously premature and not fully reliable coming from Alou, who is not a doctor as far as anyone knows.

If the injury does prevent Moyer from continuing his career, it would surely be unfortunate for the owner of 267 Major League wins to fail to go out on his own terms. Moyer is expected to travel back to the United States in order to be examined by a specialist.

Phillies minor league infielder Ozzie Chavez has posted a .250 batting average in 5 games for the Toros. Chavez is a 27-year-old Dominican native.

Phils lefty pitching prospect Yohan Flande has made 2 starts for the Toros and has posted a 5.14 ERA while going 0-1. In 7 innings pitched, the 24-year-old Flande has struck out 6 batters.

A member of the 2010 Lakewood BlueClaws team that won the South Atlantic League championship, Ebelin Lugo is on the Oriente Estrellas roster, but has yet to pitch in a game.

Derrick Loop, who pitched in 16 combined games (5-1 record, 0.32 ERA) between Clearwater and Lehigh Valley in the Phillies organization this year, has thrown 5 relief outings for the Aguilas. In DWL action, Loop has allowed 2 earned runs in 3 innings pitched (6.00 ERA).

Minor League stalwart Andy Tracy is also on the Aguilas roster. Tracy, a 2010 International League all-star with the Lehigh Valley IronPigs, is just 2-for-29 (.069 avg) in 8 games.

Timo Perez, a former New York Met that played with the Reading Phillies in 2010, is batting .327 with 7 RBI in 12 games as a member of the Licey Tigres.

Former Phillie Pedro Martinez is listed on the Tigres roster, but he has not pitched in any game action.
Left-handed pitcher Fabio Castro, another former Phillie, has posted a 1-1 record with a 1.59 ERA in 3 starts with the Gigantes. In his most recent outing on Saturday, Castro struck out 11 batters in 6 innings pitched. Castro is best known for being traded for Matt Stairs in 2008.

Infielder Jonathan Villar is 0-for-3 in 3 games with the Aguilas. Villar, a 2010 South Atlantic League all-star as a member of the Lakewood BlueClaws, was part of the package traded to Houston in July for Roy Oswalt.

Former Phils pitching prospect Zack Segovia has allowed 1 hit in 5 innings of relief for the Estrellas. Segovia, now in the Yankees organization, has a 1.80 ERA in the DWL.