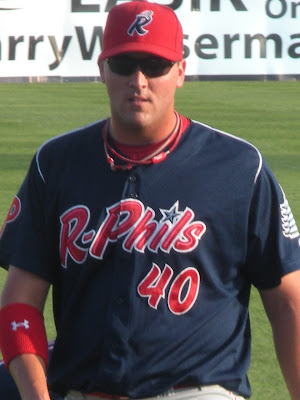 MESA, AZ- Matt Rizzotti, who enjoyed an outstanding season in the minor leagues at three levels of the Phillies organization, brought his hot bat to the Arizona Fall League last month. As a member of the Mesa Solar Sox, the lefty batting first baseman from Floral Park, NY has continued his impressive 2010 into the Autumn.

The 6'5" Rizzotti has made himself a prospect to be reckoned with by blazing through the minors throughout the Spring and Summer, posting a .343 batting average and a .985 OPS in 125 games. He was also one of just two Phils minor leaguers who moved up two levels to stay, during the season. The other was pitcher Vance Worley.

Among Arizona Fall League batters that include top prospects from several Major League organizations, like Seattle's second overall draft choice from 2009 Dustin Ackley, the Angels' Brandon Wood who has played at the Major League level, the Blue Jays' Eric Thames who was an Eastern League MVP candidate this year and Braves' top prospect Freddie Freeman, Rizzotti ranks near the top in batting average (.344) and on-base percentage (.500).

However, while some of Rizzotti's stats are swelling up in Hulkish fashion, his power numbers haven't gone green accordingly. Through 18 games in the Arizona Fall League, Rizzotti has collected just 2 extra base hits, both doubles.

"It's the same as when I started the season in Clearwater. I wasn't trying to do too much, and that's exactly what I am trying to do out here," said Rizzotti, who hit just 1 homerun in 31 games at High A level Clearwater, prior to earning a promotion to Double A Reading, where he smashed 16 homers in his next 77 games. "In Clearwater, the power wasn't necessarily there, and then there was a point where I started to feel good and take some bigger cuts.

"The season here is just a month long and I've just been focusing on having good plate appearances and seeing more pitches. Even though the power isn't there, mentally I still feel fantastic up there (at the plate) and that's important. Sometimes you don't mind sacrificing power for feeling very focused."

Rizzotti, a 6th round draft pick in 2007 out of Manhattan College, credits Mesa hitting coach Mark Parent with influencing his maturation as a hitter this fall. Parent, of course, is a former Major Leaguer who managed the Phillies Class A club the Lakewood BlueClaws to the South Atlantic League championship this year. "(Mark Parent) brings experience...all the tough situations of the game- he's been through them all. It's really good to (be around) him." Rizzotti stated.
Parent's collection of big name contacts are probably what made the biggest impression on Rizzotti, however. This week in Mesa, as Parent spoke of his days as a player and working out with Nolan Ryan, Rizzotti shot a disbelieving, "There's no way you worked out with Nolan Ryan!" toward his coach. Parent had to present the saved entry for the Hall of Famer, and other well-known baseball names, in his own cell phone's directory in order to convince Rizzotti that his tales were true.
Back at home on the east coast, Rizzotti must be added to the Phillies' 40-man roster soon. Without doing so, Rizzotti could be subjected to Major League Baseball's Rule 5 draft. The Rule 5 selection process, done annually each December, is designed to prevent organizations from stock piling too much talent in their minor league system and to allow players who may be blocked at higher levels to gain an opportunity to ascend toward the Majors elsewhere.
The clock is ticking for a 24-year-old prospect like Rizzotti, but don't expect the Phillies to simply let him walk away for nothing.

When the Phillies protect Rizzotti, he will still be blocked at his position by 3-time all-star and former league most valuable player Ryan Howard, who is signed through at least the 2016 season. That situation could result in Rizzotti's name becoming attached to trade talks. If such rumors start to fly, it won't bother Rizzotti.

"If those rumors arise, it's not a good thing, it's not a bad thing. I came up in the Phillies organization and I know everybody, I know the whole system and if I got traded it would be just like starting over. As a player, it's always good to be traded because that means someone is thinking (highly of you) somewhere."
The focus remains strong with Rizzotti to reach the Major Leagues. Ideally, he'd like to stick with the organization that drafted him. He's virtually grown up in the Philadelphia system and he has built relationships, with players as well as coaches, that are closer than he keeps his own buzz cut.
The Phillies recently announced the hiring of former Phillie and Chicago Cubs legend Ryne Sandberg to manage their Triple A affiliate, the Lehigh Valley IronPigs. Provided Rizzotti remains with the Phillies, he could start the 2011 season with the 'Pigs and might be afforded the opportunity to begin building his own collection of Hall of Fame digits.
________________________________________________________
To hear my previous interview with Matt Rizzotti, click HERE.
Follow PhoulBallz.com on Twitter, by clicking HERE.