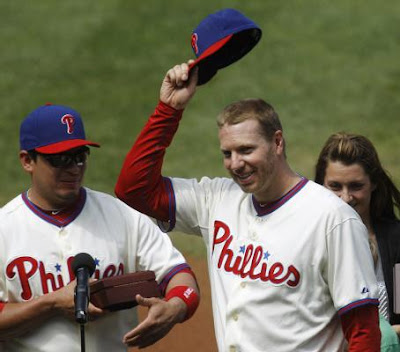 Halladay was acquired by the Phillies last off-season in a trade that sent three prospects (Kyle Drabek, Michael Taylor and Travis D'Arnaud) to Toronto. In his first season with Philadelphia, Halladay posted a 21-10 record with a 2.44 ERA, while striking out 219 batters and walking just 30 in 250 2/3 innings. Halladay's win total was tied for the Major League lead, while his strike out total was second in the NL and his ERA ranked third in the league.

According to the Baseball Writers Association of America, Halladay was the 13th unanimous choice in National League voting, as he received all 32 first-place votes. Voting is done in a format that includes two writers in each league city. The unanimous vote gave Halladay a perfect 224 points, based on a tabulation system that rewards seven points for first place votes, four for second, three for third, two for fourth and one for fifth.
Another Phillies hurler received votes from writers. Roy Oswalt, acquired by Philadelphia from the Houston Astros in a mid-season trade, placed sixth in NL Cy Young Award voting, behind the Cardinals' Adam Wainwright, the Rockies' Ubaldo Jimenez, the Braves' Tim Hudson and the Marlins' Josh Johnson, in order from highest to lowest.

A day after being revealed as the cover image for the MLB 2K11 video game, Halladay got a bigger honor by becoming the sixteenth multiple-time Cy Young Award winner. The game will be available on all major consoles next Spring.

Last month, Halladay was named the recipient of the 2010 Major League Baseball Clutch Performer of the Year Award presented by Pepsi. The clutch performer nod is an officially recognized MLB honor that is decided by fan voting. Halladay threw a perfect game against the Marlins in May and threw the second post-season no-hitter in MLB history in the divisional round of the NL playoffs in October against the Reds, although the postseason is not factored into the voting.

Halladay is the fourth pitcher in Phillies history to be crowned as the league's top pitcher and the first since 1987, when reliever Steve Bedrosian was bestowed the honor.

"I think that says a lot about your team," Halladay said of the Cy Young Award, last month. "The year won in Toronto, I honestly believe it was more a result of guys around me than how I actually pitched. Other years I thought actually pitched better. You need other guys' help to get you the end results. There were games in second half where I didn’t necessarily pitch as well and liked and walk out with a win, and you need those. It definitely would mean a lot, but really it’s a huge reflection of the guys around you."