Sandberg Headed Back to Phillies Organization? 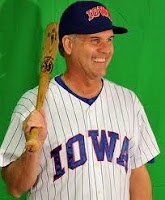 Rumors are flying today that Hall of Fame player Ryne Sandberg could become the next manager of the Phillies Triple A affiliate, the Lehigh Valley Iron Pigs.

After being passed over for the Chicago Cubs managerial position, Sandberg is parting ways with the organization. Sandberg, who managed the last four seasons in the Cubs' minor league system, finished runner-up to Mike Quade, who was hired on Oct. 19. Quade took over, in an interim role, for Lou Piniella, who retired during the 2010 season.

Sandberg won the manager of the year award while leading the Triple A Iowa Cubs of the Pacific Coast League to record of 82-62, which was tied for best in the league.
According to reports, Sandberg has been in contact with multiple organizations regarding coaching positions at the Major League level and managerial positions in the minors.

The Lehigh managerial slot is not he only vacant position that the Phillies have right now, as the recent departure of Davey Lopes has left a vacancy in the Major League Phillies' first base coach's box. Sandberg has stated that he thinks he may know within a couple of weeks where he'll be working in 2011.

Sandberg was a 20th round draft selection by the Phillies in 1978. He broke into the Majors with Philadelphia in 1981 before being traded to the Cubs in a deal that sent Larry Bowa to Chicago for Ivan De Jesus. In his time with Chicago, Sandberg became a franchise icon while proving himself to be one of the most reliable players in baseball. He won the the National League Most Valuable Player Award in 1984 and was a 10-time all-star during his Hall of Fame playing career.

Initial speculation, among those close to the Phillies system, had one of two rising stars among the organization's minor league managers being in line for the vacant spot with the IronPigs. Those big coaching prospects are two former catchers, who spent time with the big league Phillies, Dusty Wathan and Mark Parent. Wathan, who started as manager with short season Williamsport in 2008, has moved up one level in each of his two previous off-seasons managing in the Phillies' system. Wathan was named South Atlantic League manager of the year in 2009, when he led the Class A Lakewood BlueClaws to the SAL championship. Parent was given the same honor, in his first season in the Phillies organization, after leading the BlueClaws to their second straight SAL title.