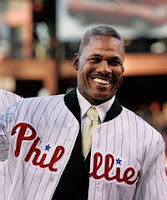 In a press release today, the Philadelphia Phillies announced their 2011 Major League coaching staff, which includes former Phillie Juan Samuel, who joins the club as the third base coach and outfield instructor. Previous Phillies third base coach Sam Perlozzo will be moving over to coach first base.

A spot on the Phils' coaching staff was vacated when Davey Lopes recently announced he would not be returning next year, due to a contract dispute. Lopes had been the Phillies first base coach for the past four seasons.

The 49-year-old Samuel had spent the previous four season coaching third base with the Baltimore Orioles, which included a stint as their interim manager following the dismissal of Dave Trembley in June. Samuel has also coached with the Tigers and managed at the Double A level in the Metropolitans' system.

Samuel was the Phillies Wall of Fame inductee in 2008. A 3-time all-star during his playing career, Samuel batted .263, hit 100 HR and stole 249 bases in his Phillies career. Samuel was named Sporting News Rookie of the Year in 1984, when he stole 72 bases, scored 105 runs and set a team record for at bats in a season with 701. Samuel was also named to the All-Vet team, upon the closing of Veterans Stadium in 2003, which was determined by online voting. Primarily a second baseman, Samuel also played in the outfield.

In the press release, Phillies manager Charlie Manuel said, "I feel fortunate that we were able to add someone of Juan's stature to our coaching staff. He was a tremendous Major League player and a big part of Phillies history and I'm looking forward to him passing on his knowledge of the game to our players. He's a great addition to our organization."