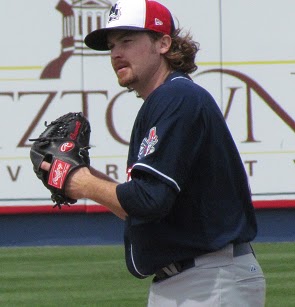 Over last off-season, righty hurler Tyson Brummett parted ways with the Phillies following six season in their developmental ranks and after making his big league debut late last season with the Phils.  Brummett was picked up off waivers by Toronto in October. The 28-year-old was then optioned shortly afterward. After being outrighted to Triple-A Buffalo, Brummett landed on the Double-A New Hampshire Fisher Cats roster in April.

Through nine games with NH thus far this season, Brummett is without a win and sports a 5.91 ERA, but tossed six shutout innings against his former club, Reading, early this month.

Recently, I spoke with Tyson about the differences between the Phils and Blue Jays organizations, his time playing in the Venezuelan Winter League, facing top Phils prospect Jesse Biddle and plenty more. Read ahead for that full interview.


- What would you say are the key differences between the Phillies and Blue Jays organizations?

There's always a lot of differences. I was in that organization for a long time. I grew up with a lot of those guys, you know, roommates and people like that, coming up through the ranks. This is my first time in a different organization, obviously there are new people, new faces. At the end of the day, it's still baseball. You've gotta go out there and perform and do all those fun things on the field.

I mean it's always...you get up to face your old organization. I know there's guys that jump around and have played for three or four different organizations. I think there's that kind of connection there. They know you and you know them and things like that, but you always want to go out and put on a show for the team that you used to be with and obviously the team that you're with against your old team. Kind of like giving a message like, "Hey, I can still help a team win."

As for Biddle, that kid's got a great future ahead of him. He's definitely on his way to a very good career.


- I spoke with your teammate Kevin Pillar and he admitted to me that, after that outing against Biddle in Reading when he threw six scoreless innings and struck out 10, Pillar had the date circled on his calendar for another shot at him. Did you get the vibe from a lot of the Fisher Cats players that they all felt the same way?

Oh, yeah! Definitely, with how things started over there (in Reading), both times we've faced him, he's gotten into a little bit of trouble early. He got lucky over there. The one up there in Manchester, he wasn't lucky. He walked a couple guys, hit a pitch count and stuff like that. I think that's how we all are, competitors. If I pitch bad against a team, I want to go back at them and get them again. I'm sure with hitters, for anyone that's a top prospect that gets the best of you, or with anyone that kind of makes them look stupid, so they want to circle the date or wonder, "When's the next time we get to take a crack at him?"


- In recent years you've gotten to pitch in the winter leagues, when you've completed in Venezuela. What can you tell me about enjoying success down there?

Winters leagues are fun. I've been down there the past two years. My first year down there I had what anyone would call my better winter league experience. I mean, I came kind of toward the end of November. Pitched there, started real hot, made the playoffs, went to the Caribbean World Series. So, I kind of got the whole caboodle all in one take. My first year down there I was kind of amazed. I have a special spot in my heart for that stuff. It's good competition. The guys that are there are former big league players, or guys from that country that are on their way to the big leagues. Just a good competition. The fans love it. I mean, they're, I think, I've never been to a European soccer game, but I imagine they're comparable. They save up all week to go to one game. It's a riot.


- I spoke to Darin Ruf last year after he got back from playing in Venezuela and he talked about how welcoming the native players are because they know that you're foreign. He said it kind pays forward because you all do the same for those guys that come to play here. Did you get that same vibe?

Oh, yeah. Whenever they come up here, obviously we have our little quirks and the crazy things that we do, but when you go down there, it's they're world and you have to appreciate their things and you're kind of like the Lone Ranger. Most of the people down there in the Latin communities, they're welcoming because they know that you went out of your comfort zone to go down there. So, if you put on a good performance and you're a good player, then they'll like you that much more. It's a fun experience.


- And just back on the topic of your team here for the regular season, I know you mentioned you were with the Triple-A team for a short stretch and now, of course, with New Hampshire. Who has been the biggest help to you thus far in the Blue Jays system?

I mean, honestly, there's a lot of veteran guys both here, in Double-A and at Triple-A. I think I probably learned the most, it was my first big league (spring training) this year, I had a lot of guys that I played with and Northwoods League and collegiate leagues. Once you've played this game and you move around, it's hard to not run into somebody you've played and vice versa. It's just really good communication over here. Lots of friends. They went out this year and picked up a lot of veteran guys, so it's a lot of guys that have been all over the place, so you feel like you have an instant connection with them, 'cause they're kind of in the same boat you are. I think overall it's pretty welcoming.


- Have you been up north of the border, to Toronto, since the team acquired you?

I haven't been up to Toronto yet. Just been up to Buffalo for a week, but I'm looking forward to a shot at it.