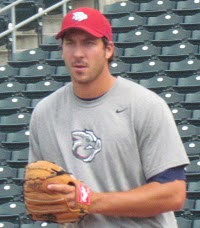 Following Wednesday's 3-0 victory over the Miami Marlins, the Phillies announced that reliever Phillippe Aumont had been demoted to Triple-A Lehigh Valley, with a corresponding move to follow prior to the team's next game on Friday.

For a club that entered that evening's contest with a bullpen ERA that ranked 4th worst in all of Major League Baseball, surely some adjustments were in order.  However, Aumont was not the problem.  As recently as Sunday, the 24-year-old righty's season ERA was 2.92 and sat at 2.25 last Friday. After coughing up two earned runs in 2/3 of an inning on Monday, Aumont's season ERA rose to an unlucky 4.15 in 16 games.

Surely Aumont, who gave up runs in each of his two most recent appearances and who sported the worst WHIP (2.08) on the pitching staff, hadn't been sparkling as of late, but he had an ERA better than the Phils' stud 8th inning guy Mike Adams just last weekend.

Triple-A hurler Mike Stutes, who has been blazing hot out of the IronPigs bullpen lately, as he's tallied a 0.59 ERA over his last 11 games with 14 strike outs and three walks during that stretch, is deserving of consideration for a promotion and could be the guy that fills the void left by Aumont.

In 63 career big league contests, the 26-year-old Stutes has a 6-2 record along with 3.86 ERA.  Stutes missed much of last season after requiring shoulder surgery in June.

Again, there's no question that some revamping was needed in order to improve the Phillies' relief corps, but there are multiple pitchers hurting the team worse than Aumont had been.  Here's hoping the move is temporary and the 6-foot-7 260-pounder gets the chance to work on his command and the silver lining of a potential Stutes return sees his success continue.