By Jay Floyd May 27, 2013
It's another round of our weekly minor league notes, featuring key performers from each full season level. 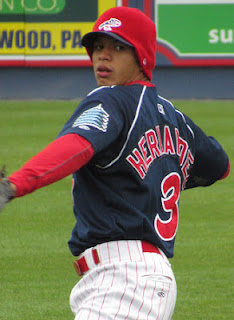 In 23 contests this month, second base prospect Cesar Hernandez is sporting a .241 batting average, after he posted a .375 mark in 24 April games.  The switch-hitting Venezuelan turned 23 years old last week.

OF Steve Susdorf is batting .346 with five doubles and seven RBI in 18 May games.  The 27-year-old lefty hitter was a 19th round draft pick by the Phillies in 2008.

OF Darin Ruf has been out of action since Thursday, sidelined with a jammed thumb.  The slugger batted .195 in his previous 10 games prior to the ailment.

Top prospect Jesse Biddle had a weak outing (4 IP, 6R/5ER) on the mound against Harrisburg for the Fightins on Sunday, but his two hits raised his season batting average to .556.  The 21-year-old left-hander saw his season ERA go from 2.50 up to 3.15 with that performance.  Biddle's 66 strikeouts lead the Eastern League, while he ranks just 12th in the league with 54 1/3 innings pitched.

Right-handed hurler Brody Colvin has been manning the bullpen for the Fightins, since his latest disable list stint.  The 22-year-old has allowed three earned runs in six innings as a reliever. 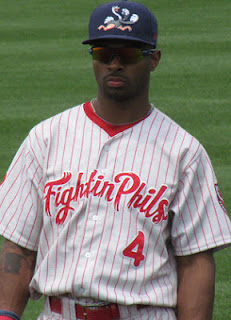 Righty closer Luis Garcia has tallied a 0.63 ERA in nine May outings.  The 26-year-old Dominican previously pitched in the Dodgers and Nationals organizations.

Outfielder Cameron Perkins is leading the Class A Advanced Florida State League in batting with a .353 mark.  The Purdue product was the Phils' 6th round draft choice last season.

Aaron Altherr, another Threshers outfielder, ranks 5th in the FSL in batting with a .317 mark.  The 22-year-old was the Phillies' 9th round draft selection in 2009.

Catcher Justin Dalles is batting .429 with three doubles, a home run and six RBI through six games with the BlueClaws thus far this year.  The former Orioles prospect is a 24-year-old righty batter.

Shortstop Roman Quinn is batting .325 with six stolen bases in his last 10 games.  The switch-hitting 20-year-old was the Phillies' 2nd round draft pick n 2011.