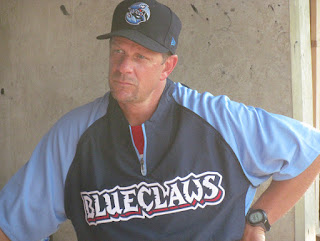 It's our weekly rundown of notes from the minor leagues.  For the most part, I'll serve up some quotes from Class A Lakewood manager Mickey Morandini, as I spoke with him on Sunday.

On his BlueClaws team, that sports a 9-20 record, as a whole:

"Even though the record's not where we want it to be, we're still seeing a lot of good out there, out of the young kids, so, that's the main thing here, is getting these kids better and having them progress as best they can."

On Australian right-hander Josh Warner (1-3 record, 7.50 ERA in six starts), who was demoted to extended spring training on Sunday:

He's only 20-years old.  He's got a good breaking ball, a good change up.  He just got in a situation where he was leaving his fastball out over the plate.  And like I said, we're gonna make some changes down there on the rubber, try to get a little more deception, especially against right-handers.  We like Josh a lot, he's had a lot of success, he just went through a rough spell here, so we just thought is was best to get him back down there and work on a few things, then hopefully get him back up here."

On catcher Chad Carman (24th round pick, 2012), who is slated for surgery to repair a broken finger on his right hand this week:

"I don't know a time table for when he'll be back.  They're going to insert a pin in his finger, so it's not going to be soon.  My best guess would be a reevaluation sometime around the All-Star break, or something like that, and we'll see where he's at."

"Every player knows what he's hitting.  But with Roman, we had a nice conversation a couple days ago about trying to see more pitches, laying off the high pitches for him, he's a low-ball hitter...a guy that needs to hit the ball on the ground, use his speed and keep the ball out of the air.  And the last (few) days, he's been much better.  He's been getting deeper into counts, starting to hit some more ground balls.  So, I'm not worried about Roman.  He's still learning how to hit left-handed.  He's probably got 350-400 at bats left-handed and until we see a higher sampling, in the 1,500 at bat range left-handed, I'm not going to be too concerned with it.  He's got great bat speed from that side, for someone that hasn't hit that much from that side, so I think he's going to be alright left-handed, he just needs to get more at bats."

"He's struggling, there's no question about it.  He got off to a slow start and it kind of compounded with some frustration and, so right now, he's just kind of hitting on his heels a little bit, he's not using his back side, like we want him to use his back side, which is forcing his head to move a little bit and he's not getting a good feel for the strike zone.  He's taking a lot of third strikes right now.  We're just working on him trying to get more of a load, use his back side, get off his heels.  I think basically, he needs to go out, get a couple hits and he'll be fine.  We've all been through it."


-Lakewood's Willie Carmona is enjoying some additional playing time, while first baseman Art Charles is sidelined with a sprained wrist.  During a current eight-game hitting streak, the Phils' 11th round draft pick from 2012, Carmona, is 14-for-32 (..438 avg).  Charles is expected to return to the active roster this week.

-Additionally, I heard from outfielder Tyson Gillies, who was demoted from Triple-A Lehigh Valley this weekend after posting weak stats with the IronPigs.  The 24-year-old Vancouver native was batting .148 with a homer and three RBI through 18 games in Triple-A prior to the demotion.  Gillies was in good spirits and is looking forward to bouncing back with Double-A Reading, where he went 1-for-6 with a walk in two games this weekend.

-20-year-old third baseman Maikel Franco has looked great this season with the Class A Advanced Clearwater Threshers.  Through 29 games, the Dominican native has posted a .309 average along with 13 doubles, six home runs and an organization leading 27 RBI.