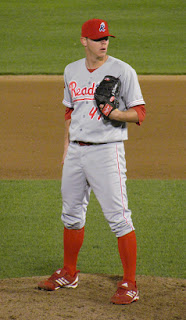 Right-handed reliever Justin De Fratus has recovered from the elbow ailment that kept him out of action throughout all of spring training and has begun facing batters in minor league rehab appearances.  The Phillies' 11th round draft pick from 2007 has been checking in, on a regular basis, and providing exclusive updates directly to the fans about his road back to action at the upper levels, throughout the past several weeks, right here on PhoulBallz.com.

De Fratus, 24, went 6-3 with 15 saves, a 2.99 ERA and 99 strike outs in 75 1/3 innings in his time with Double-A Reading and Triple-A Lehigh Valley last year before making his Major League debut in September and holding opponents to a .083 batting average in 5 appearances.

This week, De Fratus, who has been on the disabled list for the Phillies since the season began, is back in action, appearing with the Class A Advanced Clearwater Threshers as he works his elbow into shape in somewhat of a delayed spring training.  This week, Justin shared his thoughts on his return to competition, his steps going forward, the Phillies' struggling offense and more.  Read ahead for a full rundown of Justin's exclusive comments.


On where he is with his progress right now and what is next...


I threw in an extended spring training game on Thursday and I threw a scoreless inning for the Threshers (on Sunday). The cool thing about the game with Clearwater was that I had those first outing jitters and I missed that.  It was good to feel that. I'm happy with where I am. In the grand scheme of things, you've got to remember that this was essentially my second outing of spring training.  So, even though it's April, I have to remind myself that I'm not going to be as sharp as I want to be.  I'm still trying to get a feel for the strike zone and everything.  I'm throwing strikes, but I'm not throwing it as aggressively as I normally would.  I'm getting into the flow.  No cause for concern, this is normal for the stage that I'm at right now.  Everything's been completely positive right now.  I'm really happy with where I am.


As far as what the plan is moving forward, I know I'm throwing again (with the Threshers) on Wednesday and we'll see where we go from there.


On what has helped motivate him during the down time and while on the road to recovery...

For me, the big motivator is to get back to pitch and being the person that I feel that I was put on this Earth to be, which is a baseball player.  When I'm not playing games, I kind of feel lost almost.  For me, the whole motivation is to get back to be doing what I feel I should be doing.  I just want to get back out there and get some batters out.


On what he has learned from this time on the sidelines, while the rest of his teammates have come north and gotten their season rolling...


It has definitely taught me patience, that's for sure.  It's taught me that's it's okay to not go full bore all the time in the off-season and everything, and that being in shape and ready to go is a process, and that I am going to get older and so I've really got to listen to my body.  Everything that has happened with this is really a blessing in disguise, so I'm going to be able to take from this that I should pay more attention to my body, and to take more time in my throwing progression, and really give my arm a chance to be at full health.  It's kind of like when I tweaked my oblique in 2009, it taught me to really pay attention to the strength and conditioning part of everything.  You can't take anything for granted, because it's not always going to be there.  I've got to just really take care of my body.  That's what I've really learned from this.


On what goes through pitchers' mind when weak offense becomes a trend and causes stellar pitching efforts to go to waste....

From the team perspective, you're upset, because you want to win games.  Our job is to go out there and get outs and to put up zeroes anyway, regardless of if they're going to score 1 run or 10.  We're out there to hang zeroes.  I don't really give much thought to that.  If my team's going to score 1 run, we better not give up any.  You don't really think of it as, "Oh my gosh, I'm going out there and I'm only going to get 1 run."  One run is enough to win!  And I'm sure if you ask other pitchers, they'll say they fully expect to win if they get 1 run.


It's still so early in the season to get worried about it.  The team's going to come around.  There's no doubt.


But (when the offense struggles) there might be a little frustration, but not on the individual side of it.  It's more of a frustration like, "Man, we really want to get this team going," When you know the team can be better.  It doesn't change our game plan at all.  The goal for a pitcher is to not give up runs, so I wouldn't give much thought to it.