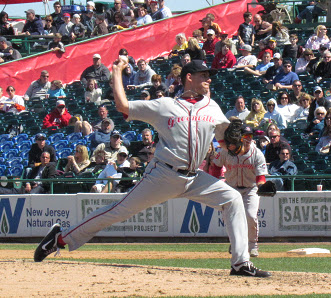 On Sunday, the Class A Lakewood BlueClaws got a dose of a pitcher destined for bigger things in the near future.  Following righty hurler Matt Barnes' 5 2/3, 8 K, 0 BB, 3 H, 1 ER performance for the Greenville Drive at FirstEnergy Park, the 21-year-old was reportedly promoted to Class A Advanced Salem.

According to Lakewood manager, former big league All-Star Mickey Morandini, his BlueClaws haven't seen anything near the likes of Barnes in the South Atlantic League this season.

"He's one of the best pitchers in the league. We knew that- we saw him when we first opened, down there in Greenville, so we knew the stuff he had and we knew it was going to be a tough game for us," Morandini said.

"So far he absolutely is (the best pitcher we've faced thus far), hands down.  He obviously has a real above average fastball, he was throwing 95, 96 out there with an excellent change up.  He didn't have his real good breaking ball today, but he didn't need it much.  But, yeah, he's a power pitcher and he gets a lot of strike outs.  You can tell from his stats coming in, he had throw 21 scoreless innings, so he's a real good pitcher.  We knew we were in for a dog fight.

The lone run that was charged to Barnes was an inherited runner allowed to score by reliever Hunter Cervenka.  It was Barnes' first run surrendered this year in 26 2/3 innings pitched.  The 6-foot-4-inch 205-pound UConn product struck out 42 batters and walked just 4 with Greenville.

To hear Barnes' post-game question and answer session with the media, check out the media player below.

For a quick clip of Matt's windup, click HERE.