Burrell to Retire as a Phillie 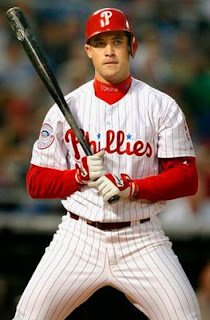 On Thursday the Phillies announced that Pat Burrell would sign a one-day contract with the organization and ceremonially retire as a Phillie, next month.

According to a release from the Phillies:

The 35-year-old will sign a one-day minor league contract with the Phillies, thus officially retiring as a member of the organization that selected him as the very first player in the 1998 draft. He’ll be honored during pregame on Saturday, May 19, by throwing out the ceremonial first pitch.

Burrell wore Phillies pinstripes for nine seasons and ranks fourth in club history in home runs (251), eighth in RBI (827) and ninth in extra-base hits (518). His Phillies career concluded with a World Championship in 2008. His last hit as a Phillie was a double that led to the winning run in the decisive Game 5.

Since leaving Philadelphia, Burrell, who was the 1st overall draft selection by the Phils in 1998, played with both Tampa Bay and San Francisco. In his 9 seasons with the Phillies, Burrell posted a .257 batting average in 1,306 regular season contests. In addition, the University of Miami graduate ranks 4th in club history in homeruns with 251 and is 8th in RBI with 827.

May 18th is the date for the return of Burrell. Mark it down.