BlueClaws Win with Speed and Power 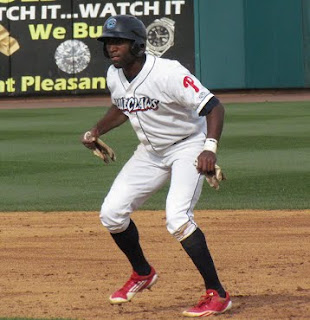 LAKEWOOD- Speed, speed, speed and a little power is what the 2012 Class A Lakewood BlueClaws are all about. Aggressive base running, including four stolen bases and one massive hit helped the 'Claws lock down a romp of the Nationals affiliate Hagerstown Suns on Saturday.

Meanwhile, heavy hitting third baseman Maikel Franco launched a pitch from Suns reliever Alex Kreis out onto the concourse behind the grass berm in left field for a two-run homerun (video here) that capped a seven-run 7th inning for the BlueClaws, who downed the Suns 14-4 to the delight of a near sellout crowd of 6,880 fans.

The 23-year-old Eldemire, who missed the past two seasons with wrist injuries, leads the South Atlantic League with 8 steals. The Ohio native made his official pro debut at the start of the 2012 season, despite being a 6th round draft choice in 2010. Originally misdiagnosed with a bone bruise, when he had actually suffered torn ligaments, Eldemire later would undergo multiple surgeries to get himself back into playing condition. The right-handed hitting right fielder feels the down time provided him with an opportunity to refine his mental focus and prepare for the challenge of professional competition.

"I haven't played in two years, so I've just been practicing and rehabbing also, so I've just been getting my mind right for the regular season," Eldemire stated. "You know, I was really anxious to get out here, so that was a big part of it also. If you have your mind right, then you can do well."

The 19-year-old Franco, who had three hits in the contest, has been working hard on his offense since a weak stretch of 17 games with the BlueClaws last season in which he posted a .123 batting average. He now has restored confidence thanks to the coaching of his manager, former Phillies All-Star Mickey Morandini.

"Mickey Morandini is a good person and a good manager. We work every day to improve. We work every day in the weight room, on the field, at hitting, and throwing, and my running. He's very encouraging and helps his players keep focus. He's great," Franco said.

Morandini is in his second season of managing in the professional ranks and his first with Lakewood. A guy that was never a powerhouse (32 HR in 11 big league seasons), Morandini appreciates small ball and plans to use the speed in his line up from guys like Eldemire, Hudson and Altherr every chance he gets.

"God gave them speed and that's something we can't teach these kids is speed, and we're going to utilize that," Morandini said. "We're gonna make things happen, put pressure on the defense. When opponents are worrying about the runners on base, they're going to forget how they want to pitch guys and make some mistakes.

"(The line up is) gonna hit some homeruns, but not enough where we can call them power hitters, so that's why we gotta go out there and manufacture runs and occasionally we can depend on a homerun."

One day shy of his 21st birthday, Lakewood starting pitcher Colin Kleven, who sports a 93 MPH fastball, earned the win, going 6 solid innings while allowing 3 runs, all of which were unearned.

Left fielder Brian Pointer, 20, smacked a run-scoring triple in the 'Claws' 6-run 3rd inning. The 28th round draft selection from 2010 leads the club with 9 RBI.