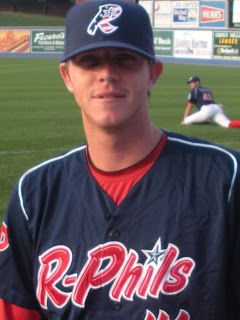 As right-handed reliever Justin De Fratus recovers from an elbow ailment that kept him out of action throughout all of spring training, the California native has been checking in, on a regular basis, and providing exclusive updates directly to the fans right here on PhoulBallz.com.

The 24-year-old reliever went 6-3 with 15 saves, a 2.99 ERA and 99 strike outs in 75 1/3 innings in his time with Double-A Reading and Triple-A Lehigh Valley last year before making his Major League debut in September and holding opponents to a .083 batting average in 5 appearances. Heading forward, De Fratus, who was ranked 5th on the 2012 PhilliesNation.com prospect rankings, hopes to be an impact contributor in the Phillies bullpen for years to come.

For Justin's most recent thoughts on his progression to full health, Phils' rookie infielder Freddy Galvis and more, read ahead and step inside the J-Bone Zone...


On his progress and what the next steps will be-
Everything's been great. The ball's coming out of my hand really well and I'm going to have my first live B.P. session (on Friday) and we'll see where it goes from there. I mean I feel great and I expect to be back pretty soon.The plan is still that I'll pitch a couple games with the extended spring training team and then maybe a couple with Clearwater and then hopefully, after that, that's when I'll be good to go.


On if he gets to bond with any other rehabbing players, in Florida-
The two other guys that are here are Michael Martinez and Jose Contreras. As far as hanging out, no. We just kind of go to the field, get our work done and then go home for the day.


On how he's able to keep up with the big league Phillies from so far away-
I use that MLB At Bat app, so I catch all the games whenever I can. I've been watching all of the games on that application on my iPad. I've been following the guys, definitely.


On Freddy Galvis, his teammates from the past two seasons, getting a chance to impact the big leagues-
It's no surprise to me. I've seen the guy play for a couple years now. It's really exciting for me to get to see him play and especially with that hit he got (on Wednesday) night against Josh Johnson in a big spot. It's just really cool to see that happen and after that, there's going to be some definite confidence in him now. He's gonna start playing really well. That's what I think. I'm just really happy for the guy. He's a great guy and he deserves everything he has.


On his very own MLB rookie cards being in circulation and if he's got any-
I've seen them. I get a ton of them in the mail to sign, so I've definitely seen them. But as far as me having any, no I don't have any. I know my family has bought a few. That's more for them. If the time ever comes, when at the end of my career, I want to have a few baseball cards of myself, I know my family will have them, so I'll be able to get them from them. It's definitely cool, but I'm not gonna start my own collection of my own baseball cards.


As always, thanks to Justin for taking time to address the fans and provide exclusive inside looks at his life and his progress. Check back each week for more J-Bone Zone.