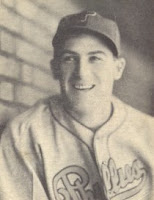 Hugh Mulcahy was a pitcher with the Phillies from 1935-1940, then again from 1945-1946. Mulcahy was the first Major League regular to enter the military during World War II. Mulcahy was a converted infielder, whose arm strength earned him a trial on the pitchers mound.

Mulcahy was purchased by the Phillies from the Senators in July 1935 and made his Phillies debut that year in a single inning of relief work against the Pirates, the only other Major League team he would ever play for. In that appearance, he faced Lloyd Waner, Paul Waner and Arky Vaughn, three future Hall of Famers, and retired them all in order. Mulcahy then made 5 starts, but failed to win any of them and was sent back to the minors and was urged to abandon his side arm delivery, and raise it to a higher angle. Mulcahy went on to earn 25 wins with Hazleton to lead the Class A New York-Penn League. That would earn him a return trip to the big leagues.

Mulcahy's time with the Phillies earned him the unique nickname of "Losing Pitcher", as he led the National League in losses twice. He never had a full season in the Majors in which he won more games than he lost. Following an 18-loss 1937 season, in 1938 Mulcahy went 10-20, to lead the league in losses. The following season, when he posted a 9-16 record, the reporters began referring to Mulcahy as "Losing Pitcher Mulcahy".

In 1940, Mulcahy lead the NL in losses again, with a 13-22 record, but he pitched better than his record might indicate as he completed 21 games and finished the season with a 3.60 ERA. He defeated the defending champion Reds three times out of five starts. In July he reeled off 5 straight wins and in late September, in his final start before leaving for military service, he defeated 9-time all star and 2-time MVP Carl Hubbell and the Giants 6-0 at the Polo Grounds. He also made the all star team that season by posting 7 of his wins by the all star break.

Mulachy would miss the next 4 seasons serving his country. When he returned to the Phillies in August 1945, he had lost considerable weight from an illness and lost his fastball as well. Despite participating as an instructor at a 3 week camp, for players returning from military service prior to spring training 1946, Mulcahy was no longer the same pitcher that he was prior to the war. He would win only 3 more games for the Phils, upon his return. He saw action in 2 games for the Pirates in 1947, and he pitched in the minors after that, until 1950.

After retiring from playing, Mulcahy would work as an instructor in the Chicago White Sox system for several years and even serve as an assistant pitching coach for Chicago during the 1970 season.