Bruntlett Signs With Nats, Manager Book Worth Checking Out

By Jay Floyd December 29, 2009
Washington Nationals, you just had two consecutive 100+ loss seasons...what are you gonna do now?
We're going to Beard-o World! 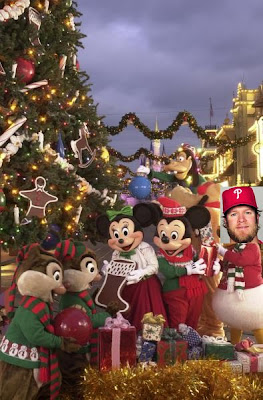 On Monday, the Nationals signed Eric Bruntlett to a minor league contract with an invitation to spring training. Bruntlett batted .172 with a .462 OPS in 72 games for the Phillies in 2009.

Looking for a good way to spend those AmEx and Visa gift cards that you got for the holidays? Make sure you check out Chris Jaffe's book Evaluating Baseball's Managers, A History and Analysis of Performance in the Major Leagues, 1876–2008. Jaffe is a writer for HardballTimes.com. The book, just made available to the public, is a remarkable study of Major League managers throughout the history of the sport and applies a sabremetric approach to reviewing the performances of such great skippers as Connie Mack and Tommy Lasorda.
The book is full of facts and unique statistics and facts about managers and their team's characteristics. In a passage on ex-Phils manager Jim Fregosi, Jaffe points out that Fregosi is the only Major League manager to last 10 years in the profession without ever having a batter belt at least 8 triples in a season.
Evaluating Baseball's Managers also takes a look at another ex-Phillies manager. The book points out Boston manager Terry Francona's success when his team has its back against a proverbial wall, as Jaffe digs into how gritty the Red Sox have played in recent years, going 9-2 in post season elimination games.
Here is a link you may use to find and purchase this anthology of baseball history...Click here to purchase the book.
----------------------------------
Follow PhoulBallz.com on Twitter HERE !