Ladies and gentlemen, I proudly bring to you the inaugural edition of THE BALLZIES...PhoulBallz.com's annual awards given out for the finest achievements in the Phillies organization as well as related things and stuff. Without any additional delay, let's get this thing rollin'.

is one of the most consistent hitters in baseball today. He's had four straight seasons with 45 or more homers and over 135 RBI. Howard also won the most valuable player award of the NLCS in 2009. He is one of the greatest Phillies hitters of all time. There's not much else to say.

Phils' #1 prospect hit for a .299 batting average in 106 games while smashing 14 homers, 64 RBI and swiping 23 bags. When watching Brown play it is easy to tell he's got the right tools and he is a pure athlete. Speed on the bases, range in the outfield, an excellent arm, a solid bat...it's all there. Brown projects to be a Major League starter and the sooner Jayson Werth prices himself out of the Phillies' budget, the sooner phans could expect to see Brown in red pin stripes on a full time basis.


Team of the Year- Lakewood BlueClaws

The 'Claws won the South Atlantic League championship this September. Led by great Phillies prospects like Anthony Gose, Trevor May, Travis D'Arnaud, Troy Hanzawa, Sebastian Valle and Jim Murphy as well as manager Dusty Wathan, Lakewood clinched a playoff berth with a strong first half of the season and beat the Greenville Drive for the league title. It was Lakewood's second ever SAL championship.

I was there for the most unforgettable game of the year. With 2 outs, my lady grabbed her bag and said she was getting ready to leave. I replied and told her I was getting ready for a WIN! Jimmy Rollins immediately followed with the biggest hit of his career to put the Phillies in control of the National League Championship Series. Tremendous!

After winning both the division title and the National League Championship Series and clinching a second consecutive trip to the World Series at home, Phillies players took to toasting the late Harry Kalas with beers and champagne at the left-center field sign that honored him. Without Harry, there could be no more perfect moment. 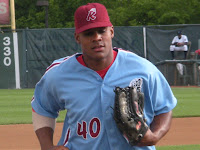 be found HERE. It's a good look at the prospect who was dealt twice in one day this month as part of the Roy Halladay deal. Taylor was remarkably well spoken and excited about his own blossoming career. Oakland's newest prospect is a 5-tool talent who will join former Phillies prospects Josh Outman and Gio Gonzalez with the Athletics. Expect to see Taylor facing Major League pitching in 2010.


Best Sarge Quote- "You jerk off the ball."

Link to the clip,

brought to you by The Fightins Dot Com. Adding some of his usual questionable color to the game broadcast, Gary Matthews Sr. described the trouble with swinging too hard, during an August Jayson Werth at bat.

a turn of the century (1900) Phillie who was so proficient at slapping foul balls that baseball rules were changed. In 1901, NL president William Hulbert grew so frustrated with Roy drawing out at bats the he petitioned the rules committee to institute a new two-strike rule. Prior to that, fouls only counted as strikes if the catcher caught them. If Thomas were still around today, he might be a spokes person for PhoulBallz.

Yeah, winner, you are this site's favorite reader. I bet you are wondering how to know if I am really talking to you, or if this is just some generalized nonsense. Well, star...take my hand and let's shine together while I prove it's you that means so much to me.

Feel free to honor YOUR OWN best things from 2009 in the comments section. I wish you all the best as you ring in the new year.

Jay Ballz said…
How about coolest name or most fun name to say...
YOHAAAAN FLANDEEEEE!

Hate to see you go/Miss you already award- Cliff Lee

Unknown said…
Nice picks for the awards and definitely like the award you gave Bruntlett in the Comments.

Maroussia said…
It will be great to watch NLCS: Philadelphia Phillies, i have bought tickets from
http://ticketfront.com/event/NLCS_Philadelphia_Phillies-tickets looking forward to it.
March 8, 2010 at 4:53 AM