Polanco is Back Thanks, in Part, to Ibanez 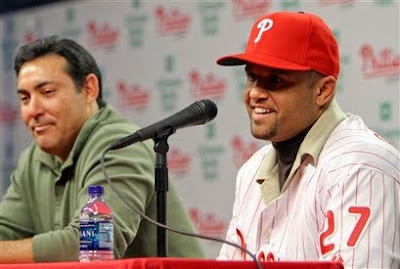 I was happy to be wrong in doubting the Placido Polanco rumors, as they sprung up Wednesday night. Not so much because I am in love with that signing, but because I am relieved that the only vacant position on the starting defense is filled, an the team can now focus on filling the remaining holes in the pitching staff.

The acquisition of Polanco is a solid one. Based on the expected impact on the actual lineup (Shane Victorino moves from the 2 hole, down to the 7th spot and Polanco brings his discipline to the 2 slot), this addition should be an improvement. Declarations that the Phillies dropped the ball by signing "a declining hitter" are considerably premature. Yes, at the time, it seemed that the Phillies may have overpaid last offseason when they gave Raul Ibanez a 3 yr/$30 million contract, but that was proved to be a good move as Ibanez began the season in scorching fashion and became an all star for the first time in his career. Could the same be in the cards for Polanco? Time will tell.

The best detail of this signing may have been that Raul Ibanez acted as a recruiter on behalf of the Phils. Ibanez and Polanco are neighbors in Florida and work out together during the offseason. According to Scott Lauber, "About two weeks ago (Phillies GM) Ruben Amaro Jr. paid a visit to Polanco, letting him know the Phillies were interested in reacquiring him to play third base. From there, Ibanez became the club’s chief recruiter, encouraging Polanco to rejoin the Phillies." Very cool, Raul. Oh, excuse me...I meant, RAUUUUULL!!

Details on the Lakewood BlueClaws' holiday toy & food drive with mascot Buster and Santa Claus on Saturday, the 19th....click here.