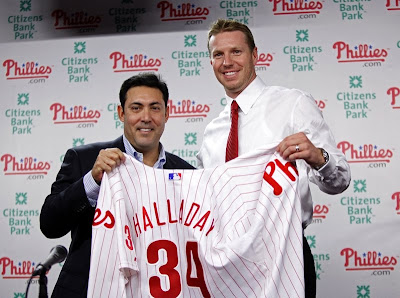 In one side of a blockbuster tri-fold deal, the Phillies acquired pitching ace Roy Halladay in a long rumored trade with Toronto on Wednesday. The deal sent prospects Michael Taylor, Kyle Drabek and Travis D'Arnaud to the Blue Jays. Money was a key factor in the Phillies side of the swap, as the Blue Jays also sent $6 million to the Phillies.

Halladay has agreed to sign a contract extension with the Phillies. It is a 3-year $60 million deal with a vesting 4th year option. The $20 million option for 2014 becomes guaranteed if Halladay meets all 3 of the following criteria: he pitches 225 innings in 2013, he pitches 415 combined innings in 2012 and 2013 and is not on the disabled list at the end of the 2013 season.

“This is where (my family and I) wanted to be,” Halladay said at an introductory press conference at Citizens Bank Park. “It was an easy decision for me. Once the opportunity came up for me to be part of this, it was something I couldn’t pass up.” It's quite a turnaround for Philadelphia, who used to be the city whose team had to trade away guys they could not pay or keep happy. Now the Phillies can afford the best, and the best are happy to play there. 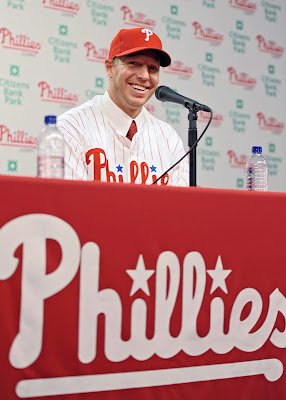 In separate portions of the blockbuster chain of events, the Phillies also sent Cliff Lee to Seattle for a trio of prospects- RHP JC Ramirez, RHP Phillippe Aumont and OF Tyson Gillies. In addition, Toronto flipped Michael Taylor to Oakland for third baseman Brett Wallace.