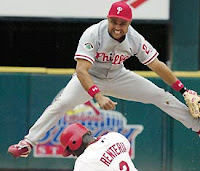 Several reports popped up Wednesday evening stating that the Phillies have elevated their pursuit of Placido Polanco, to fill their void at third base.

Other options for the vacant third base spot are still the same list of usual suspects...Adrian Beltre, Mark DeRosa and Miguel Tejada.

Beat reporter Scott Lauber of Delaware's The News Journal doesn't think the Phillies will get a deal finalized before next week's winter meetings (link here). PhoulBallz blogger ME thinks I don't believe a Polanco deal will necessarily get done. Remember two weeks ago when Mark DeRosa was just about locked into being the Phillies' new third baseman, as per media reports? Yeah, so do I. No deal! Stay tuned.

**Mid-morning update...Sports Illustrated's Jon Heyman is reporting that he expects a deal to be completed today, with the Phillies signing Polanco for 3 yrs/$18 million.**

**Late morning update...NBC 10's John Clark is at Philadelphia International Airport and says Placido Polanco arrived in town around 11am, to participate in a physical examination and to sign a contract with the Phillies. Clark spoke to Polanco, who is excited to return to the team and is ready to play third base. Polanco spoke of his appreciation of manager Charlie Manuel also. Official word from the team is expected today.**

**Evening update...Placido Polanco passed his physical today, and the Phillies held a press conference to announce the return of the spectacularly skulled second baseman, who will be playing third base for the National League champions. Welcome back, Polly.**

Jay Floyd said…
There is no typo in the evening update. I meant to refer to Polanco as spectacularly SKULLED.
He's got a large noggin, ya know...
December 3, 2009 at 6:22 PM