By Jay Floyd July 30, 2011
The deal took a while, but it's finally done. Hunter Pence is coming to Philadelphia, after the Phillies and Astros agreed to a trade on Friday night. The swap brings the 28-year-old right fielder to the Phillies in exchange for top prospect Jonathan Singleton, MLB Futures Game hurler Jarred Cosart, right-handed pitcher Josh Zeid and a player to be named later. Reports also state that the Astros will send $1 million to the Phillies.

Pence, originally drafted by Houston in the 2nd round of the 2004 amateur draft, is a .290 career hitter, playing is his fifth big league season. In 100 games for the Astros this year, Pence posted a .308 batting average with 11 HR and 62 RBI. The 6-foot-4-inch 220-pounder is a two-time National League All-star.

Singleton and Cosart were ranked as the Phillies' top two prospects by both the Reading Eagle and PhilliesNation over the past year. 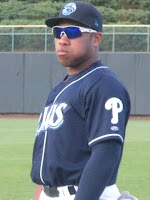 Singleton, a first baseman who has dabbled in the outfield this season, ripped up Class A South Atlantic League pitching to a tune of a .290 batting average with 14 homeruns and 77 RBI in 109 regular season games with Lakewood in 2010 as an 18-year-old. This season, as a member of the Class A Advanced Clearwater Threshers, Singleton is batting .284 with 9 HR and 47 RBI in 93 games. With his OPS dropping from .872 last season down to .800 in 2011, there's a noticeable decrease in power, but considering Singleton is one of the youngest players in the Florida State League, there shouldn't be much concern. He's posting solid numbers based on his age and the level he is playing in. 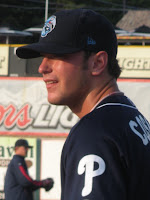 Cosart, a 21-year-old starting pitcher, posted a 9-8 record with a 3.92 ERA through 20 games with Clearwater this year. The Texas native, who sports a big time fastball that regularly ranges from 96-98 MPH, had produced 9.6 strike outs per 9 innings in his pro career prior to this season, but Cosart has seen that ratio drop to 6.58 K's per 9 innings this year. In addition to a high-velocity first pitch, Cosart also has a strong curve ball and a change up that he steadily works to improve, in his pitch repertoire.

Zeid, a 24-year-old righty, has tackled dual roles this season as well as last season. 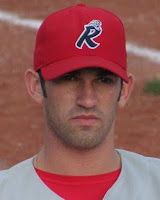 In 2010, as a member of the Class A South Atlantic League champion Lakewood BlueClaws, Zeid began the season at the back end of the bullpen, later joined the starting rotation for a couple months, then returned to the bullpen for the playoff drive. With the 'Claws, Zeid went 8-4 with 8 saves and a 2.93 ERA. The Tulane University product also successfully started 4 games for Mesa in the Arizona Fall League last year. This season, however, with Double A Reading, Zeid struggled as a starter (6.80 ERA, .290 BAA), but has shined after returning to a relief role (2.25 ERA, .182 BAA). Zeid told me recently that he is considerably more comfortable working in relief. His repertoire includes a mid-90's fastball, a slider and a fosh-change.

It is not clear, quite yet, who the fourth player that the Phillies send to Houston will be.

There is no question that, again, Phillies general manager Ruben Amaro Jr. got his man. As he has done in recent seasons, Amaro targeted the piece he thought would help his team and made a transaction happen. The same as the prospects the Phillies have traded away to add the likes of Cliff Lee, Roy Halladay and Roy Oswalt, the minor leaguers sent to Houston this time around have some truly high upside. But, to be honest, the Phillies have long viewed Singleton as a trade chip. Additionally, Cosart is the easier of the two big time prospects to lose, as the Phillies have serious pitching depth in the lower levels of their developmental system. Zeid, a guy who possesses the talent to potentially be a contributor at higher levels, is not the sort of guy the team, or its fans, should hesitate to include in a trade for an everyday player at the big league level.

Judging by the abundance internet chatter, from baseball writers and life-long fans, there are clearly mixed reactions over this transaction. Some say the Astros didn't get enough, others feel that the Phillies gave up too much. As can be said for most trades of this nature...time will tell...

On Zeid, Amaro told me earlier this year: "Josh Zeid's really kind of put himself on the map, as a prospect."

Exactly one year ago, I spoke with Singleton about surviving Houston trade rumors and remaining in the Philadelphia developmental system. Click HERE to listen to that interview.

Pence will reportedly wear number 3 when he joins the Phillies on Saturday.