De Fratus Bouncing Back After Rough Start With Lehigh Valley 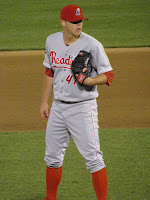 After opening his 2011 season with impressive numbers (4-0 record, 2.10 ERA, 8 saves) as a member of the Double A Reading Phillies, right-handed pitcher Justin De Fratus was promoted to the Triple A level Lehigh Valley IronPigs, where the transition was not an easy one.

One of Philadelphia's best regarded relief pitching prospects, De Fratus has had solid success at each stop of his developmental progress. However, upon his addition to the IronPigs roster in mid-June, De Fratus struggled a bit. In his first three outings in the International League, De Fratus allowed 5 earned runs in 4 1/3 innings (10.39 ERA) while walking 3 batters and striking out 5. The difficult entrance to the new level wasn't enough to get De Fratus down.

"I haven't struggled in the numbers before, like I (did here), but I didn't feel too far from being right. The confidence was still there," De Fratus stated.

In four appearances since his considerably poor first week as an IronPig, De Fratus has turned things around, earning 2 wins, while allowing just 1 earned run in 7 1/3 innings (1.23 ERA) with 1 walk and 12 strike outs.

In the developmental process, some players that are met with challenges and tough times may get discouraged. The 23-year-old De Fratus is to the contrary. His focus and attitude are what set him apart from many other prospects.

"I just had to be patient and wait for things to turn around, because I knew they would," De Fratus said. "The reason I was not frustrated is because I knew what was going on. As opposed to going, 'Why is this happening?' No, right now I know what's going on and I know what I need to do to fix it. And all I can do is work on it everyday and just be patient. You can't be unlucky forever and you can't be bad forever, so as long as you're willing to work on it, things will turn around."

The initial bump in the road for De Fratus' statistical line, upon arrival at the Triple A level, was due to adjustments the right-hander was making in his delivery from the stretch.

"(I was) trying to become a little quicker to home plate and improve my times for holding runners and all that kind of stuff, which will effect your delivery a little bit. So we were trying to find a comfort zone where I can be quick to the plate and still make quality pitches. And that was the transition I was going through," De Fratus said.

It was clear to the 6-foot-4-inch 220-pounder that he had improvements to make, in order to continue to develop as a professional pitcher. The refinement can only help him in the long run.

"A lot of new things are being brought to the surface as far as what kind of things I need to work on to improve my game at this level and even the Major Leagues."

De Fratus, who spent time with the big league Phillies this year in spring training, has been one of the organization's most steadily ascending farmhands in the past few of seasons.

In 2007, upon making his professional debut as a member of the Gulf Coast League Phillies, De Fratus posted a 2-3 record with a 4.30 ERA and a .273 batting average against in 10 appearances, 8 of which were starts.

The following season, De Fratus pitched with the short season Williamsport Crosscutters. In 14 games as a starter, the California native posted a 6-5 record with a 3.67 ERA.

In 2009, De Fratus was a key member of the Class A Lakewood BlueClaws pitching staff, taking on both starting and relief duties. In 36 games (12 starts) that season, De Fratus went 5-6 with 3 saves and a 3.19 ERA, while helping the BlueClaws reach the postseason, but he missed some time due to an oblique injury.

Last year, De Fratus really increased his prospect status with a tremendous full-season-and-beyond campaign. Combined at Class A Advanced Clearwater and Double A Reading, De Fratus posted a 3-0 record with a 1.94 ERA and 21 saves while striking out 71 batters in 65 innings. Following the regular season, De Fratus was a key contributor on the pitching staff that helped Team USA go 9-1 in the Pan-American Qualifiers. Additionally, he held opponents to a .125 batting average in 7 scoreless Arizona Fall League appearances.

With De Fratus now just a step away from reaching the big leagues, he's mentally prepared for the road ahead, which hopefully includes the completion of a lifelong goal, and could quite possibly include more hiccups along the way.

"I've still got plenty of time to reach my dream and I know that there will be more adjustments to make once that happens. I just always want to improve, so that is all I will stay focused on."