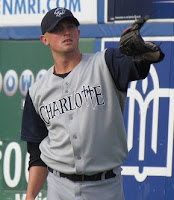 Former Phillie Joe Bisenius is making a case to earn his third promotion to the big leagues. The right-handed hurler, who was a member of the Phillies' bullpen at the dawn of the team's recent run of four straight division titles and spent time last season with the Washington Nationals is now pitching tremendously for the White Sox Triple A affiliate, the Charlotte Knights.

Bisenius, an Iowa native, was originally selected in the 12th round of the 2004 amateur draft by the Phillies.

After quickly rising through the Philadelphia developmental ranks, Bisenius made his Major League debut with the Phillies in 2007, tossing two scoreless innings of relief in April. However, struggles in the minors in each of the following two seasons and in 2010 spring training, got Bisenius released.

Last season, Bisenius was signed as a free agent by the Nationals and worked his way through three levels of their system, before making 5 appearances with the big club late in the season, as a September call up.

Now, in a new organization, Bisenius, a product of Oklahoma City University, feels like he fits in well and is looking forward to continued success with his new team.

"Everything's been good so far," Bisenius stated. "The guys have been great. The organization's been great so far. I'm looking forward to getting out there each chance I get."

The 28-year-old Bisenius still sports an explosive fastball that touches the high-90's at times and regularly resides around 94-95 MPH. Control issues have always been the aspect of his game that has held Bisenius back, as his walk totals have hurt him considerably throughout his career. This season, even with an unimpressive 45-30 strike out to walk ratio in 45 1/3 innings, Bisenius has posted strong numbers.

Following a quick stretch with Double A Birminghan in which he posted a 1-0 record and a 2.70 ERA in 6 games, Bisenius was promoted to Triple A Charlotte where he has been excellent. In 5 starts, Bisenius is 2-0 with a 1.78 ERA.

Additionally, after being a reliever for his entire career, the 6-foot-4-inch 210-pounder is pitching regularly as a starter in the White Sox system.

Nothing has come easy for Bisenius, as he has dealt with several ups and downs in recent years and he seems to miss the feel of home he came up with, in the Phillies organization. Despite that, he is pleased with his current position and is happy to have an opportunity to continue striving for his dream of being a big league pitcher.

"The last two years I've been released out of spring training," Bisenius said. "Ideally, when I was with the Phillies for 6-7 years, that's probably the better situation, but I can't complain so far. Everyone's been real great over here and it's been a smooth transition. I'm just trying to give a good impression and move forward."

A poised individual on and off the field, Bisenius openly credits some folks within the Philadelphia system with helping him to develop a strong mental approach and a resilient focus.

"There are a lot of guys (I would credit with) teaching me a lot at the start of my career, to be honest. That's one of (the Phillies') strong points, is their coaching staff. But, (Lehigh Valley pitching coach) Rod Nichols...he was always looking out for me and kind of took me under his wing. He's a great guy. From Rod to the pitching coordinator Gorman Heimueller to Steve Noworyta- he does a great job overseeing the whole minor leagues. I mean, I could keep naming more guys and more guys, but they hire first class guys and it really shows with the product they put on the field," Bisenius said.

Bisenius also cites being on the Phillies opening day roster as a highlight of his career, but attributes being around that entire roster through spring training and the early part of the 2007 season as a considerably educational period and he found himself taking great satisfaction with those former teammates' accomplishments, even when he was no longer on the roster.

"Just being around that quality of clubhouse with guys like Chase Utley, Ryan Howard and Ryan Madson, those class-act guys, it's a good way to learn how the game should be played. Just being able to watch those guys, it was cool to see good guys like them succeed and win the World Series."

But, while Bisenius reflects on the early chapters of his career, as a member of the Phillies organization, with great fondness, he has turned the page and is focused on writing some more of his own big league tales.

"Right now, I'm with a new organization and I'm trying to open some eyes on this team and show this organization that I'm willing to go out there and attack the zone, throw strikes and get guys out. Ultimately, I want to pitch for the White Sox."

Anonymous said…
I've seen him pitch. He has an explosive fastball and a sharp breaking curve. Injuries have slowed down his rise to the majors. The Sox got a lucky and got a good one!
July 13, 2011 at 5:36 PM