By Jay Floyd July 19, 2011
Professional wrestler CM Punk, whose contract with World Wrestling Entertainment was set to expire this past Sunday, has been threatening for weeks that he would win the WWE Championship in his final match, in his home town of Chicago, and take the title with him when he left the company.

Punk has been stirring up great amounts buzz for the sport of pro wrestling in recent weeks, as he has come close to breaking away from the "script" by insulting the boss, Vince McMahon, as well as other WWE big shots on multiple occasions. Recently, Punk declared that he was "the voice of the voiceless", offering recognition to other stars who were either let go by or never given a chance by WWE.

On Monday, after escaping the WWE's Money in the Bank event on the previous night with the WWE championship, CM Punk was spotted sporting a Cubs jersey at Wrigley Field with Phillies' 2008 World Series Most Valuable Player Cole Hamels. The Phillies tweeted an image of the two champs. 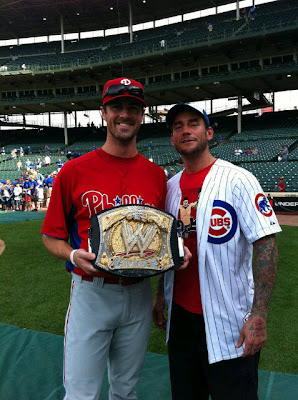 Additionally, Punk's impact was felt in the minors when independent league broadcaster Qumar Zaman used Punk's "voice of the voiceless" line as he quit his job with the Lake County Fielders, live on the air following a recent game.

As the team, which is partially owned by actor Kevin Costner, apparently struggles financially, the front office has not been paying its players, coaches and other staff members. Just prior to a recent game, the Fielders' manager and a considerable amount it the roster quit, due to the payroll issues and disrespect they had been forced to deal with.

Those that quit initially spoke their minds simply by leaving. However, Zaman, who was also not paid for several weeks, had a public platform to air his grievances and he did so. In his postgame rant, Zaman not only used a line from CM Punk, but he also shouted out his friends and expressed excitement over being able to watch Punk's expected final WWE appearance on pay per view with them. Audio of Zaman's rant can be heard in the media player below.

Props go out to AwfulAnnouncing.com for supplying the clip.

It's pretty odd that Punk would walk away at the height of his popularity and at the top of the pro wrestling business, but as he's proven to be the best at one sport, perhaps he could use some of his athletic talents to help turn around his hometown Cubbies that have not won a championship in 103 years.