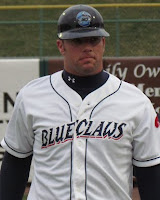 Phillies catching prospect Cameron Rupp is well-regarded for his ability to handle his battery mates with the Class A Lakewood BlueClaws and for his defensive talents behind the plate. His bat however, had not been a bragging point for the 2010 third round draft pick, until recently.

During his 8-game hitting streak, through games played on Tuesday, the former Texas Longhorn has gone 12-for-31, helping to raise his season batting average 29 points, from .214 to .243.

The scorching stretch can't be attributed to any change in Rupp's approach, however. According to Rupp, he's achieved the increased production by sticking to his familiar course of action while preparing and by doing the same things during games.

"I haven't (altered my mechanics)," Rupp said. "I've been using the same approach and everything. I've been sticking with the same thing I've been working on all year. I'm feeling really good at the plate and I've been comfortable, going up there and waiting for my pitch and waiting for spots where I can drive stuff."

Knowing that he's on quite a roll helps Rupp's mental state. The 22-year-old stressed the importance of fortitude in the great sport of baseball.

"My confidence is high, so that helps a lot," Rupp stated. "Confidence is a huge part of this game. As much confidence as you have, it's gonna take you as far as you can go. To continue to have success and keep the confidence up, it's just a matter of getting pitches to drive and working good counts, makes the ball easier to hit."

The 6-foot-1-inch 240-pound Rupp made his professional debut with short season Williamsport of the New York-Penn League . In 55 games with the Crosscutters, Rupp struggled, batting .218 with 5 HR and 28 RBI.

With college and pro ball combined in 2010, it was the longest period that Rupp had ever played through and fatigue could have been a factor in his performance as a minor leaguer.

According to Lakewood manager Chris Truby, who was the man in charge of Rupp's Williamsport team last season, the difficulty adjusting is common and Rupp was bound to adapt.

"When you're in college and you're just playing three or four days a week, you're not going through this same grind, where there's a game every single day. So, there's a lot that goes into it, preparation wise. With every situation that these players go through, there's a lot to learn from it, and (Cameron) has (done that). It's something they can look back on a few years down the road and say, 'Those struggles really helped me'," Truby said.

Leading up to his current torrid stretch, Rupp had shown steady improvement in the offensive side of his game, batting .292 in 21 games since ending the month of May with a .212 average in 36 games. This increasingly solid output must be what Lakewood hitting coach Greg Legg liked so much last week, when he was asked about the offensive production of his club's starting catcher.

"Right now, Cameron is definitely on the right track," Legg stated. "The work he's done in the (batting) cage and the momentum he's taken from the work he's done, the last two weeks, has been outstanding. His swing's getting better and shorter. I like what I'm seeing. His concentration level's picking up. I'm really encouraged with what's happening with Cameron and looking for better things from him in the second half."

Of his close work and extra batting practice with Legg, Rupp asserts that the expectations of the coaching staff are also something that can help a player rise up. Once again, it comes back to that level of increased assurance.