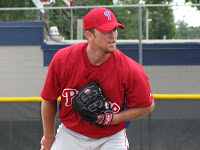 Philadelphia relief pitcher Brad Lidge made his first official regular season rehab appearance of the 2011 season on Monday night for the Phillies Class A affiliate the Lakewood BlueClaws.

Lidge tossed a scoreless inning to start the contest, against the Nationals affiliate, the Hagerstown Suns. He threw 15 pitches, 9 of which were strikes.

Initially, the outing wasn't looking too great, as Lidge surrendered hits to the first two batters of the game. However, he quickly induced a grounder to shortstop Edgar Duran for a double play, then wrapped up the opening frame on a ground out to third baseman Moose Mattair.

The right-handed Lidge, who has been out of action since spring training with elbow and shoulder issues, was rather satisfied with his effort and is hoping to progress without any setbacks.

"I’m not taking any day for granted," Lidge told Tony Graham of the Asbury Park Press. "That actually felt really good to get out there and the first time pitching in real competition since the post season last year. I was definitely pleased by the results."

While Lidge has spent time on the disabled list in each of his four seasons with Philadelphia, this is the longest stint of his career on the sidelines.

The 34-year-old Lidge, who initially dealt with a rotator cuff strain prior to the start of the regular season, last pitched on May 31st in an extended spring training game in Florida, retiring 5 batters.

Immediately after that outing in May, Lidge was confident he was headed for a rehab assignment with Class A Advanced Clearwater, but elbow discomfort set it the next day. The Phillies and Lidge hope that he feels fine on Tuesday. If that is the case, and Lidge continues to be pain-free, he will likely pitch another rehab game on Thursday. A target return date to Philadelphia is still unclear, however.

"I’m going to be here a couple of more times at least," Lidge said. "I’ve got a few outings I’m going to have to make, here, Reading, Lehigh (Valley).

"If I come out and am feeling good tomorrow, then I’ll know that, knock on wood, we’re not going to be that far off, in terms of how much longer I miss. Obviously, I’ve got to get a bunch of outings (before I am activated by the Phillies)," Lidge added.

After his inning of work in Lakewood, Lidge, who served as the Phillies' closer for three seasons, expressed a considerable level of excitement with the emergence of lefty hurler Antonio Bastardo this season. The 25-year-old Bastardo, who is 5-for-5 in save opportunities and has a 0.87 ERA this season, is filling in nicely as of late, with Lidge and two other replacement closers, Ryan Madson (hand) and Jose Contreras (forearm), on the disabled list.

"It’s very impressive," Lidge said. "When Bastardo came in (last week) and got a save against the Red Sox, Madson and I were looking at each other (and saying), “It’s not that easy, is it?’"