On Sunday afternoon, Brad Lidge and Shane Victorino competed for the Double A Reading Phillies for the second straight game against the Trenton Thunder at Waterfront Park, as both men rehabbed from injuries. On consecutive days, both men contributed to a Reading victory, as the R-Phils chase Trenton for the Eastern division Wild Card spot in the Eastern League.

Victorino, batting lead-off and playing center field on Sunday, took highly touted lefty pitching prospect deep, out of the stadium in the 1st inning, and rounded 3rd base before Reading manager Mark Parent, manning the coach's box, informed Victorino that the umpire had called it foul. Victorino then sarcastically thanked the umpires for letting him practically round the bases before informing him of the call. He then returned to the batters box and worked a walk.

Later in the frame, Victorino stole home on the back end of a double steal.

The 30-year-old All-star batted again in the 2nd inning, striking out against Banuelos, who was reaching 94 MPH regularly with his fastball. Another turn at bat against the 20-year-old phenom in the 5th inning produced a single. Victorino was later called out attempting to steal 3rd on a 3-0 count to end the inning, although video showed that he beat the tag on that play. Later in the game, Victorino grounded out against right-handed Chase Whitley.

On the day, Victorino was 1-for-3 with a single, stolen base, caught stealing and a run scored. 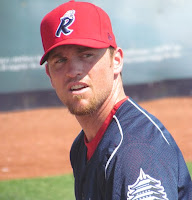 Lidge, 34, tossed a scoreless 7th inning to preserve Reading's 4-2 lead. After striking out Yankees Futures Game representative Austin Romine on 3 pitches, he surrendered a sharp single to first baseman Rob Lyerly. Lidge then induced a fielders choice that moved the runner over. The next batter, newly promoted Zoilo Almonte was credited with an infield single on a grounder to first base on which Lidge was late covering the bag. Lidge bounced back, striking out Jose Pirela on a slider for the third out.

The R-Phils team radar gun clocked Lidge's fastball from 87-88 MPH. His final line was 1 inning pitched, 2 hits allowed, no walks, no runs, 2 strike outs. While his slider has been on point throughout his rehab stints with Class A Lakewood and Reading, Lidge and the Phillies are still looking for some increased velocity as he approaches activation on the Major League roster.

"I’ve got another (rehab) game to go and I want to try to get a little more on my fastball," Lidge said, following the game. "I think my slider kind of progressed faster than my fastball."

Lidge is scheduled to pitch for Lakewood on Wednesday at 11:05 AM. After that, he hopes to be activated by the Phillies when they begin a home stand against San Diego on Friday.

The final score in the contest saw Reading edge the Thunder, 4-3, and pull to within 1 game of the Wild Card lead. Right-hander BJ Rosenberg got the win, while reliever Justin Friend notched his 6th save since his promotion from Clearwater in mid-June.