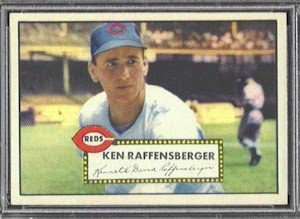 Ken Raffensberger was a pitcher for the Phillies from 1943-1947. Raffensberger debuted in the majors with St. Louis in 1939, but went a combined 7-10 over parts of three seasons with Cardinals and Cubs before spending 1942 and most of 1943 in the minors. The Phillies acquired Raffensberger after he won 19 games in the Pacific Coast League in 1943.

Raffensberger was a control pitcher who relied heavily on his sweeping curve, and rarely walked the opposition. Raffensberger walked more than 45 batters only one season in his career, while throwing more than 100 innings ten times.

In 1944, Raffensberger won 4 of his first 5 starts including a shutout of the Reds in May. Raffensberger got little run support from his team though. His record on the season was 13-20, and the Phillies scored just 2 runs or less in 12 of his defeats. Raffensberger was named an all star that season for the Phils. The following season, Raffensberger pitched in just 5 games before joining the Navy.

When Raffensberger returned to baseball in 1946, he was used in both relief and a starting role. He led the league in saves while throwing 14 complete games. His win-loss record was a weak 8-15 and that was enough to get him traded to Cincinnati the following season. That move didn't prove to be a great improvement for Raffensberger's situation as he never pitched for a team that finished above 5th place, in his career.

The lanky lefty, Raffensberger twice led the National League in shutouts. Hall of famer Stan Musial regularly identified Raffensberger as the toughest lefty hurler he ever had to face. During his time with the Reds, Raffensberger would come a lone hit away from throwing a no hitter 4 times.

In June 1954, Raffensberger was released by Cincinnati. He pitched one additional season in the minors before managing in the low minors for two seasons. He retired from baseball in 1957.