It's a Whole New Series 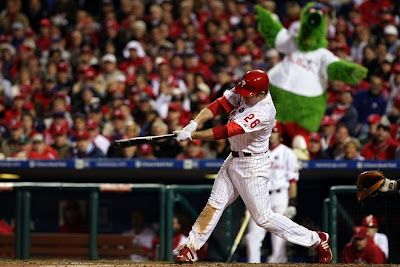 The Phillies bounced back in the World Series to force a return to the Bronx with an 8-6 victory at Citizens Bank Park on Monday night.

Cliff Lee started the game and held the Yankees to just 2 runs through 7 innings, before running into some problems in the eight and being charged with 3 more runs. Lee's final line was 7 innings, 3 walks, 3 strike outs, 5 earned runs. Those numbers are misleading, as Lee really ran the show for the defending World Champions, and truly settled in after giving up a run on an Alex Rodriguez double in the first inning.

Chase Utley was the offensive star for the Phillies. Utley blasted two homeruns, bringing his series total to a World Series record tying 5, and drove in 4 runs. Chase pounded the first homer off AJ Burnett in the first inning with 2 runners on, and the Phillies had a 3-1 lead after just 8 pitches in the bottom of the first inning. The second homer was a solo shot that came off of Phil Coke in the 7th inning.

Utley is batting .333 in the series. Burnett allowed 6 earned runs in 2 official innings pitched in game 5. Coke allowed runs for the first time in six postseason appearances this year.

Burnett's shortcomings marked the very first time this postseason that a Yankees starting pitcher did not last at least 6 innings.

In the 7th inning, with the Phillies leading 8-2, Yankees employees, friends, fans and family members in section 142 all seemed to concede the loss, as they began chanting, "We want Pedro!", referring to the Phillies' scheduled game 6 starter Pedro Martinez. The reply back was easy, "You're going to get him!"
By the end of the game, things got closer and the situation became nervous for Phillies phans. The Yankees hung around and chipped away at the Phils' lead, but Ryan Madson was able to close out a save to force a game 6. No official word on the Phillies' closer status yet, so tune in on Wednesday night to find out.
---------------------------------
Shouts out to Mike, Kevin and Sean/Shaun/Shawn, whom I met at the game and had a blast with.