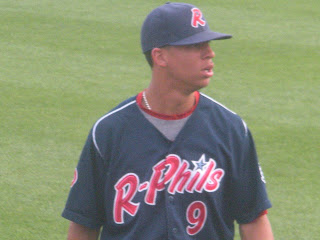 Outfielder Quintin Berry
If you missed the news yesterday, the Phillies added three minor league players to their 40-man roster, increasing the total on the current 40-man roster to 30.

2009 Reading Phillies Quintin Berry and Yohan Flande along with 2009 Lakewood BlueClaw Jesus Sanchez were the players added. Berry was an Eastern League all star in 2009, batting .266 with 48 steals for Reading. Flande was a star in the MLB All Star weekend Futures Game and won 11 games at two levels in the minor leagues this year. Sanchez, a right handed pitcher acquired in the 2006 Bobby Abreu trade, went 9-2 with a 2.57 ERA after May, helping Lakewood win the SAL title. 2009 was Sanchez's first full season as a pitcher, after converting from catching. 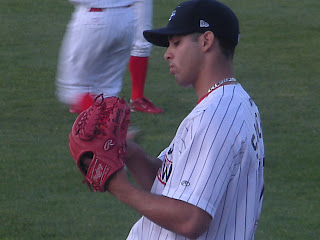 Sanchez warming up before a September start
With the Rule 5 draft coming up at next month's winter meetings, the Phillies saw fit to protect players who might be subjected to picks by other ML organizations. Players are eligible for selection in the Rule 5 draft when they are not on their major league organization's 40 man roster and 1) were signed to a contract at age 19 or older and have been in that organization for 4 yrs, OR 2) were signed at age 18 or younger and have been in that organization for 5 yrs. Each of the players added to the 40 man roster by the Phillies fits that description. 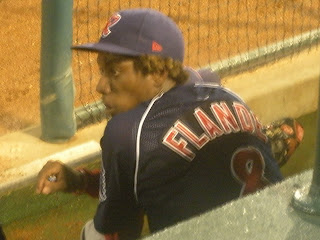 Flande watching game action from the dugout, during an August game