By Jay Floyd November 24, 2009
Last week PhoulBallz updated you on some final numbers from the land of the Arizona Fall League. There's another offseason hot spot for baseball and it's known as the Mexican Pacific League. Phillies minor leaguers John Mayberry Jr., BJ Rosenberg, Michael Taylor and Neil Sellers are playing there for the Yaquis de Obregon. Right now, the Yaquis are 20-18, in 4th place. Sebastian Valle is also playing in the league.

Sellers, who played third base for double A Reading this year, batted .371 with 3 homeruns, 18 RBI and a .953 OPS in 23 games with Obregon. Taylor, the Phillies' 3rd best prospect (as ranked by Baseball America), batted .308 with 1 homerun and 11 RBI with a .776 OPS in 19 games. Rosenberg, a closer for both Lakewood and Reading this year was 0-0 with 2 saves and a 6.75 ERA in 7 appearances with the Yaquis. Each of these three have not played in two weeks or more. No word on exactly why. Their times could be complete in the league, as ordered by the Phillies. 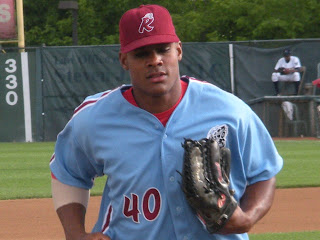 Michael Taylor
Over with the Caneros de los Mochis, 2009 Lakewood BlueClaw Sebastian Valle is still ripping up the league's pitching with a .303 batting average, 10 homers, 24 RBI, and a 1.029 OPS. Valle is ranked 7th in the Phils' system by Baseball America. Mochis is 16-21 in the league so far, in 6th place.

Former Phillie Chris Roberson is also active in the Mexican Pacific League and he's not performing quite as well as the guys still in the organization. In 12 games played for Hermosillo, Chris has a .167 avg. (8-for-49) with just 2 RBI and 5 runs scored.

The Mexican Winter League schedule runs through December 30th. The first half ended Friday with Mazatlan winning the first half title.

Check out some links to some cool content from around my bloggerhood...

Chris Jaffe of Hardball Times has a book coming out soon titled, "Evaluating Baseball's Managers". He posted a great excerpt from the book, about Phillie Pat Moran, on the Hardball Times site. Check that out here.

The 700 Level featured a shot of Philadelphia Mayor Michael Nutter paying his debt to NYC for the Phillies losing the World Series. Link right here.

Macho Row's got an update on how Pedro Martinez stays busy in the offseason- chillin' with Johan Santana, Carlos Beltran and J-Lo's midget husband. Link here.