By Jay Floyd November 07, 2009
It's been a brief offseason so far. But in the two short days since the Phillies' race to repeat ended, there have been a lot of happenings with the team. It was a sure thing that after the Yankees recorded the final out to win their 27th World Series Championship that the 25 men representing the Phillies at that time would never play together again, but as the days pass, the truth in that statement is increasingly clear. 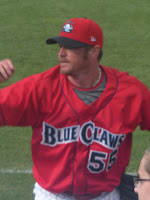 Brett Myers was informed on Friday that he will not return to the Phillies. Myers' was not surprised by the news, and looked forward to returning to Philadelphia as an opponent. Myers filed for free agency after being notified. Myers, a former first round draft pick, should draw plenty of interest around baseball. His future is most likely as a reliever.

Also filing for free agency on Friday were Miguel Cairo and Pedro Martinez. The official free agency period begins 15 days after the end of the World Series.

Two players had contracts who were finished unless the Phillies picked up the team's option for an extra year. Cliff Lee's option has already been exercised, while the Phillies have until Monday to exercise the option year on Pedro Feliz's contract. With Lee's option being jumped upon, and no action or official word on Feliz being made, that might be fairly telling for Pedro. Feliz would be owed $5.5 million next year. Lee's option is worth $9 million. 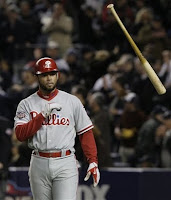 Phans should remember last year, when GM Ruben Amaro Jr. thought it was necessary to make a change in the Phillies' lineup, and as a result, Pat Burrell was let go, and Raul Ibanez was signed. Amaro doesn't ever want things to get stagnant. The third base position may be this offseason's lineup refinement. The Angels' Chone Figgins has been rumored to be on Amaro's wish list for months. Acquiring Figgins, who has averaged more than 46 steals over the past 5 seasons, would add speed to the lineup, and possibly make a player like Shane Victorino expendable at some point. With a collection of young outfielders in the minors (Michael Taylor, Domonic Brown and even John Mayberry Jr.) who are on the verge of being ready to be tested at the Major League level, making room to do so could be beneficial for depth's sake as well as financially. Adrian Beltre, who dealt with injuries this year, may be a more affordable option at third base. Figgins would be 32 years old when the 2010 season starts, and Beltre would turn 31 during the first week of the season. Feliz turns 35 at the end of April 2010.

Turning back toward pitching, the Phillies have been in contact with Chan Ho Park's agent about bringing him back in 2010. Another free agent, Scott Eyre, who is due for elbow surgery, will likely be examined as he recovers, before the Phillies decide to make him an offer or not.

The STOVE is HOT already, phans. MLB games may not be played year round, but MLB news certainly happens daily. Check back to PhoulBallz all throughout the offseason for news, notes and insight.