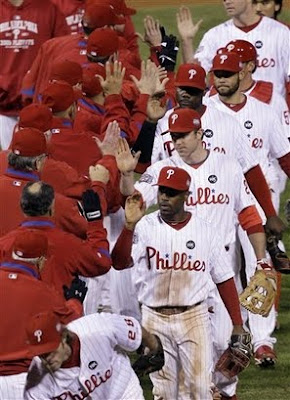 The Phillies came up short in the World Series this time around. However, players and phans alike should all still feel as though 2009 was a hugely succesful year. I got the hate out of the way with my previous post, so, looking back, here are my top '09 reasons that Phillies phans should be pleased with the season that ended 2 wins shy of a World Series repeat...

'09- The Phillies won the National League pennant. That is still a big deal.

6- Ryan Howard developed himself into a better player. Showing up in Clearwater, the Phillies' spring training facility, slimmer, to work on his defense and focus on being a better hitter, early this year was where it all started. Howard's defense was visably improved in 2009 and he raised his average, OBP, and slugging percentage as well. Howard leads MLB in homers since 2006, with 198. Even better things to come? Yes.

5- Jimmy Rollins and Chase Utley are the leaders of the team. When one is down, the other is up. When the team needs a boost, these guys get it done. Two MVP calibre players up the middle, in the infield, is tremendous.

4- You've got a brand new rivalry with real meaning. Forget about those forced rivalries that interleague play brings about with Toronto (rematch of '93) or Baltimore (regional proximity)...seperated by New Jersey, the Phillies and Yankees are full fledged rivals now, and that series from June 15th-June 17th in New York next year is going to be a blast.

3- These runs, deep into the playoffs, add opportunities for bonding, friendships, and fun. More games means more chances to get out to the ballpark and live your crazy Philly sports phan lives with people who are just like you. It gives phans opportunities to network with one another, whether it's at the local pub or online with sites like Twitter. Philly phandom is a brotherhood...it is the tie that binds.

2- The nucleus is intact. Sure, I guess everyone is saying that today, but with the complete core of the team locked up for years to come, 2009 was not the only shot this group of Phillies will get at returning a world championship and a parade to Philadelphia. Ryan Howard, Chase Utley, Jimmy Rollins, Raul Ibanez, Ryan Madson, Cole Hamels, Carlos Ruiz, Jayson Werth, Shane Victorino, Brad Lidge and Cliff Lee should all get more shots to take out the Yankees.

1- Harry Kalas would be proud of this team...and so should all of you. High Hopes forever!


It was a great season, everyone. Hold your heads up. Every group of fans in baseball, except for one, wishes they could be in your shoes.

Thanks for reading PhoulBallz.com. Stay "tuned" throughout the offseason for original content as we keep you posted on hot stove happenings, as we check in with Phillies minor leaguers and as we continue to honor the best team in the National League, the Philadelphia Phillies.

Good stuff around the internet worthy of you clicking on....

Friend of PhoulBallz and new local celebrity NeeKo has a MySpace page for his music. Check it out here. And if you missed it, NeeKo's Q&A session with PhoulBallz can be found here.

Umpire Al, AKA- RASCHATZ, has a blog that, today, takes a look at the Phillies' recent accomplishments. Click here to read that.

The700Level is proud and looks at the upgraded identity of the Phillies in baseball. Check that out by clicking this link.

The Daily News' David Murphy looks at some offseason decisions staring at the Phillies. Link for that- right here.
John Finger says the Dynasty is Delayed, and has some quotes from Phillies players. Read that article by clicking here.