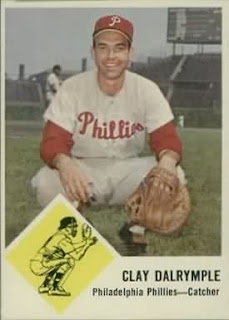 Clay Dalrymple was a catcher with the Phillies from 1960-1968. Never a huge offensive threat, Dalrymple's defensive skills kept him behind the plate as the Phillies' everyday catcher. It was well known that his signal calling abilities and strong throwing arm were Dalrymple's strengths and made up for any shortcomings at bat.
Dalrymple was part of the well-known 1964 Phillies team that is infamous for their collapse down the stretch. That season, the Phillies blew a 6 1/2 game lead with 15 games left to play.
Dalrymple's best offensive season came in 1962 when he hit 11 homers, drove in 54 runs with a .276 avg. and an .809 OPS. Over the next 3 seasons, Dalrymple's batting average would drop, plumeting to .213 in 1965. Dalrymple's sliding production with the bat became a source of frustration for many Phillies phans.
In 1966, Clay's batting average bounced back up to .245 and he had a streak of 99 straight games without an error, but his .172 batting average in 1967 was the beginning of the end of his starting gig in Philadelphia.
Dalrymple caught only 80 games the following season and was traded in the 1968-1969 offseason to Baltimore, where he would play in a reserve role, catching just 73 games in 3 season with the Orioles.
-----------------------------------