By Jay Floyd November 09, 2009
Baseball America released its list of top 10 Phillies prospects today. The article, found by clicking here, includes a projected future lineup for the Phillies, salary bonus information, a breakdown of best tools throughout the system and a review of the organization's turnaround over the past decade. The author, John Manuel, states that, " No organization transformed its image in the 2000s more than the Phillies," and it was surely for the better. 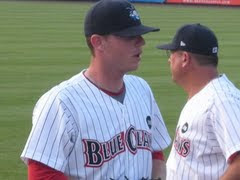 Pitching prospect Justin De Fratus, on the honor of "Best Control" on Baseball America's Phillies prospect tools list, said, "That's pretty cool to be recognized for that. To be considered the best in a certain area, in such an elite organization, is great. Especially because control and command is something I take a lot of pride in." De Fratus always credits his father Terry as being key in helping with his success with location. A while back, Justin told me, "(My dad is) the reason why I throw so many strikes, 'cause he impressed it on me at a young age- throw strikes, throw strikes, throw strikes. So it's kind of something that stuck with me. You know, as a little kid I didn't just go up there and throw the ball. I threw it with a purpose- throw the ball over the plate."