Howard's Surprise Trip to the Hall

By Jay Floyd November 30, 2012
Last week Phillies slugger Ryan Howard celebrated his 33rd birthday and thanks to his fiance Krystle Campbell, it was a memorable one.  Unbeknownst to Howard, his lady contacted the National Baseball Hall of Fame and planned a surprise visit for the pair to Cooperstown.

Although, it was the former All-Star and league most valuable player's very first trip to the Hall of Fame, Howard has been a part of multiple displays at the museum in recent years, having donated a jersey from his 2006 MVP season and the bat he used to mash two home runs in game 4 of the 2008 World Series.  Each of those items are currently on display among a Phillies exhibit. 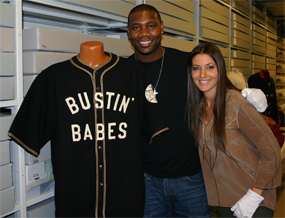 Howard, who was photographed checking out one of Babe Ruth's barnstorming jerseys from the 1920's, along with Campbell, told the Hall's director of communications Craig Muder, “Every kid wants to grow up to play baseball, then to win the World Series and some day make the Hall of Fame.  Just to see my bat and jersey – to see all the history here – it’s awesome.”

The Cooperstown trip served as a nice prelude the couple's upcoming early-December wedding.

This year, Howard has displayed his fandom of baseball quite a bit, as he attended the MLB All-Star Home Run Derby back in July, sitting among the crowd in Kansas City.