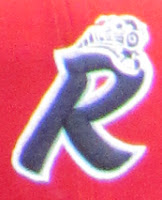 Some noteworthy bits of news popped up today, topped by the revelation that the Phillies' Double-A club in Reading, which recently announced an upcoming name change, will reportedly be known as the Fightin's.  Rumors circulated online, early Tuesday, and a post by Chris Creamer of SportsLogos.net confirmed that the Reading team registered some telling domain names, which included ReadingFightins.com, FightinsBaseball.com and ReadingFightinPhillies.com.

This proposed new name is not bad, especially since, in recent days, fans seemed greatly displeased over the team doing away with the Phillies name after using it for 46 years.  Simply using a different form of the previous nickname allows the club to avoid getting too far away from something that so many baseball fans throughout region have grown up with as well as the heritage that local fans love and appreciate.

Using "The Fightin's" does seem silly, however, as Reading's main focus in changing the nickname of the team was to develop their own identity.  Going with a variation of the name and brand they've been affiliated with for nearly five decades does not accomplish such a feat. 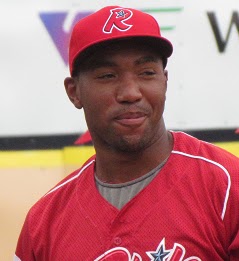 Additionally, BaseballAmerica released their list of minor league free agents on Tuesday.  The tabulation of Phillies minor league free agents includes just one player drafted by the organization, namely outfielder D'Arby Myers (pictured) a 4th round selection in 2006.  Myers, who helped Reading reach the Eastern League playoffs in 2012, is a cousin of NBA legend Shaquille O'Neal.  Another pair of free agents, infielder Harold Garcia and right-handed hurler Drew Naylor, were foreign-born amateur signees by the Phillies in 2004.

The remaining list of free agents largely includes players that were veteran minor league free agent signings at a previous time.  Key names among those no longer under contract with the Phillies include infielders Tug Hulett and Miguel Abreu, catcher John Suomi, pitcher Scott Elarton and outfielder Michael Spidale.