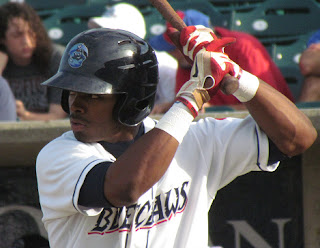 On Saturday, the Peoria Javelinas won the Arizona Fall League championship in a winner-take-all one-game match up with Salt River, following a season in which the club posted a league-best 19-13 record.

Peoria, which was made up of prospect from the Phillies, Reds, Twins, Padres and Mariners, featured many highly regarded prospects. Phils minor league outfielder Zach Collier was among them and was a certainly key contributor all throughout the five-week long season. In 19 games, the 22-year-old California native posted a .371 batting average with four doubles, three triples, 10 RBI and three steals.

Collier, who began the 2012 regular season serving a 50-game suspension following a positive test for a banned substance in 2011, has had a slow rise in the developmental ranks after he was selected by the Phillies in the supplemental first round on the 2008 draft out of Chino Hills High School (CA). Along with missing time this year, Collier sat out the entire 2010 season following an injury to the hamate bone in his right hand, a left quadriceps issue and surgery to repair a torn tendon in his right wrist.

This past week, prior to the AFL title game, I had the opportunity to interview Zach about his time in the AFL, bouncing back from the suspension, his manager Dusty Wathan, his future and plenty more.

- I think this is something I asked you about in 2011, after your injuries, but, coming off your suspension and time missed in 2012, did you feel a greater sense of urgency to make an impact and post some solid offensive numbers?

I felt the need to perform well, of course, but I didn't want to put pressure on myself like I have in the past.

- You performed extremely well in the Arizona Fall League for the Javelinas. Is the competition there what you expected and what do you attribute to your excellent output?

Thank you. The competition was at a very high level and everyone here in the AFL is gifted. It was a blessing to be here and my mindset was to absorb as much as possible and compete the way that I know I can and focus.

- Plenty of players move up to the majors very quickly after participating in the AFL. After setbacks with your developmental time during your career, does being there, in Arizona with many top tier prospects, make you feel closer to the big leagues?

Yes, I have yet to see Double-A pitching until now and I like what I've seen so far. Every pitcher (in the AFL) is a prospect and I feel I have done very well. In my mind, the bigs are not far away at all.

- Presumably, you would begin the season next year with the Double-A Reading team. What do you hear from your AFL teammates and other friends about playing ball in Reading?

They all love it and really enjoyed the experience. As fun as it would be to play there, I don't plan on spending very much time there...

- Dusty Wathan, your manager in the AFL, is Reading's manager now and managed you with Lakewood a few years ago. What can you tell me about playing for Dusty?

Dusty is a great manager, hands down. In my opinion it's super important for players to feel comfortable with the manager and know that he is about making his players better. He does just that. His vibe in the club house and on the field makes it fun and easy to go out and compete daily.

- With the AFL title game on Saturday...how important is that contest, after weeks of hard work?

To me this is huge! I want to win...as always. But, I love this game and the feelings I get. Saturday will be a great day. We grind hard on the daily to get where we are. It will be a great reward to walk away champions of the AFL.

- Coming off a successful 2012, what are your goals for next year?