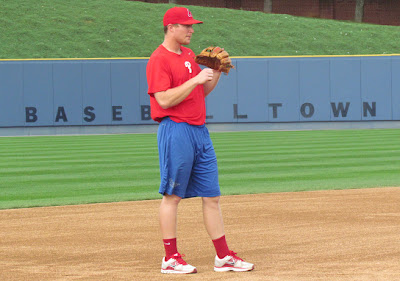 Reading, also known as Baseballtown, will no longer call its team the Phillies

As you read here first last week, the Phillies' Double-A club in Reading, PA will undergo a full rebranding, which will include a full name change, the team confirmed on Sunday.

The Reading franchise will announce the new nickname, logos and uniforms at an event to be held at FirstEnergy Stadium on Saturday, November 17th at 12:30 PM.

The upcoming change will end the team's run of 46 years as the Phillies. While Reading will continue its long-standing affiliation with the big league team from Philadelphia, the rebranding will occur in an effort for Baseballtown to develop its own identity.

News of the team dumping the Phillies name, in favor of the unknown, was met with displeasure from the public, as fans expressed their shock online.

Personally, this was a massive surprise and I was rather disappointed when I learned of the switch last week.  Targeting a new, individual identity at the expense of the one that generations have grown to love certainly presents a difficult situation.  Representatives from Reading's front office must have expected some consumer backlash, but the team seems confident that the public will appreciate and connect with the new nickname.

Early impressions by some who feel the club is abandoning the most appealing qualities of the sport and some of its teams, those qualities being tradition and history, aren't very far off.  Not only have many people in the area always cheered for the Philadelphia Phillies, but they've grown up rooting on the R-Phils as well.  This team has been a part of Phillies heritage for nearly five decades.

I will assert that if Reading allowed its fans to vote on a team name, the way other clubs have done at times, that would unquestionably deliver an overwhelming opinion to stick by the Phillies name.

Discussions on mediums like Twitter and Facebook have delivered ideas for the new nickname, with humorous options like the Rainbows joining more serious concepts with railroad themes.  Join the conversation by offering your thoughts and suggestions in our comments section.