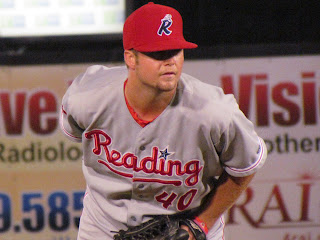 Through 10 outings with the Peoria Javelinas in the Arizona Fall League, righty reliever Tyler Knigge has posted a 1-1 record with a 7.50 ERA, while striking out 10 batters and walking five over 12 innings.

Knigge, a 12th round draft selection by the Phillies in 2010, took great strides during the regular season, as he tallied a 4-1 record, nine saves and a 0.60 ERA in 34 outings for Class A Advanced Clearwater, en route to becoming a Florida State League All-Star.  He then earned a promotion to Double A, where he tallied a 2.92 ERA with no decisions and two saves in 21 appearances.  Additionally, Knigge, who sports a fastball that has been clocked at 97 MPH, averaged 9.09 K/9 at the two levels this season.

This week, Tyler offered his thoughts on his troublesome AFL stats, his close relationship with top Phils prospect Jesse Biddle, his intentions for the near future and plenty more.  Read ahead for that full interview.


- Taking a look at your stats out there, through 8 games, your ERA sits at 10.00. What would you attribute the difficult stretch there to, compared to your tremendous regular season with the Threshers and R-Phils?

After coming off the season I had, I was ready for the AFL. When I got here, I quickly realized that these hitters are the best of the best. I can't just beat them all with my fastball. They can hit a 97 mph heater no problem. I'm having to learn to pitch my slider in fastball counts and keep the hitters off balance.

Going through my struggles here is only going to push me harder than ever before. I will rise to the occasion and push myself harder. This experience will not be wasted, but it will be used more as a knowledge base builder to reach my ultimate goal which is the big leagues.


- Are you working on anything new? Mechanics or pitch wise?

My time here is for me to focus more on my slider and make it a big league plus pitch. I have seen great improvement on it in terms of control and movement.


- How did you find out you were selected to play in the AFL and what kind of honor is it to be chosen?

I was just sitting in the locker room in Reading and after one of our games, (manager) Dusty (Wathan) came up to me and said, "Congratulations, you've been selected to pitch in the AFL." It's the biggest honor I've received in professional baseball and I'm honored to be representing, what I consider the best baseball team in Major League Baseball. I want to represent them in the most professional manner possible.


- Would you have pitched in another off-season league, if you didn't go to the AFL?

It was a possibility. When (minor league pitching coordinator) Gorm (Heimueller) and I sat down together, we had talked about it. But I'm glad to be here now.


- There are plenty of Arizona Fall League graduates that move on to the big leagues. Does playing there make you feel any closer to your ultimate goal of pitching in the majors?

Without a doubt it does. Like I said earlier, these hitters are the best of the best. If I want to be the best, I have to beat them. This is prep for the big leagues and I feel I'm getting much needed experience to compete at the highest level.


- You always speak highly of your coaches and teammates. Who has been the biggest help to you during your pro career?

Hands down Jesse Biddle. He's always someone I can bounce things off of. We have a great friendship that allows us to keep each other in check. We are always pushing one another. Along with that, every coach I've had has helped me in some way, whether it be mentally or physically.


-I know you spent last off-season working a job, helping people find work. What are your plans for your off-season this year?