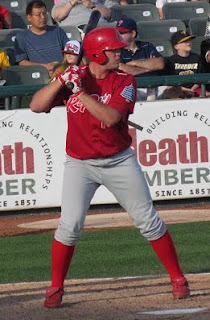 The highs and lows of professional baseball are no better evidenced by Darin Ruf's day on Sunday. Shortly after grounding into a double play to end the Reading Phillies' season, the slugger learned that he would be joining the big league Phillies.

Pained by the loss, just moments after the Trenton Thunder eliminated the R-Phils from the Double-A Eastern League playoffs, Ruf reflected only on the disappointment of his team falling short of a championship, not what could lie ahead. It was Ruf's first time in the playoffs as a professional and, more than anything, the EL most valuable player and Phillies Paul Owens Award winner wanted to lock down a title for his team.

Despite outhitting the opposition 13-5, the Reading Phillies came up short, leaving eight runners on base in the final game of the best-of-five series.

Reading was victorious in the opening game of the series, but the Thunder, who are looking for their third Eastern League championship in six years, rebounded to win the next three contests.

Trailing 5-4, the R-Phils had the exact scenario they would have drawn up if given the chance...two runners on base for their top offensive player, Ruf. Pinch hitter D'Arby Myers led off the inning with a single against Thunder closer Ryan Pope. Following a failed sacrifice attempt by Tyson Gillies, who had three hits in the game, third baseman Cody Asche laced a single of his own, to put runners at 1st and 2nd for the man who smashed 20 home runs in the month of August and added his first blast of the postseason just three innings prior. This time, though, Ruf would bounce into a season-ending double play.

"Every player wants to be in that position, but when you don't get it done it feels awful," Ruf stated. "It’s tough, because you battle all year for your teammates, and it comes down to that one last at-bat. But I feel awful for the rest of the guys, for all of us, that we have to go home now."

But going home isn't what Ruf will be doing, as he is slated to join the parent club in Philadelphia as they begin a series against Miami on Monday.

Unable to appreciate the tremendous season he had (.317 avg, 38 HR, 104 RBI) or the historic month his posted in August (20 HR, 36 RBI in 31 games), Ruf speculated, following the game 4 loss, that it might be a few days before he would take the time to reflect. The focus of the Phillies' 20th round draft pick from 2009 was solely on the disappointment of how Reading's season ended.

It wasn't long before Ruf's attitude deservedly took a turn as he was given the news that he earned a promotion to the Major Leagues. Reminiscing over his landmark year with have to wait quite a bit longer, as his 2012 season has just been extended by about three weeks.

In the deciding game of the best-of-five series, lefty starter Adam Morgan took the loss, allowing five runs and five hits while striking out three and walking one in six innings. Right-hander Kyle Simon retired all six batters he faced in relief.

Reading jumped out to a 1st inning lead when Leandro Castro drove home Cody Asche with a single. Trenton tied the game in the 2nd inning on a run scoring double by Tyler Austin.

The decisive run came with two outs in the 6th inning as Trenton shortstop Addison Maruszak stroked a solo HR off Morgan. The other big blow for the Thunder was a two-run homer by catcher J.R. Murphy that capped a three-run 4th inning.

The Phils would battle back, chipping away at Trenton's lead, plating two runs in the 6th on Ruf's homer and on a bases loaded sac fly by Jiwan James. An RBI single by Asche in the 7th got Reading within a run, but that was all they could muster.

Reading manager Dusty Wathan, who always sees the bigger picture of player development, even in the face of a playoff loss, saw positives and was pleased with his team.

"I think it was an outstanding year. The guys played hard all the way to the end, as you can see. Every one of these games, we were in the game. I think that's all we can ask of a team, is to play hard and try to get the most out of them. These guys improved a ton. We sent some guys up, a couple guys to the big leagues all the way from here, so I was really happy with this season," Wathan said.

Ruf will now join Tyler Cloyd, Steven Lerud and B.J. Rosenberg as players who spent time at Reading this year that are currently on the big league roster.

Asche, who will play off-season ball in the Arizona Fall League, batted .429 in the series.

Catcher Tommy Joseph is also slated to play in the AFL.