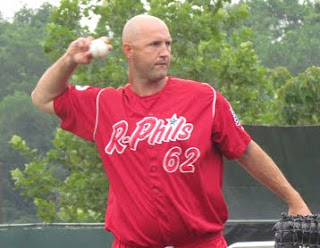 Prior to tonight's game 2 of the Eastern League division series, I spoke with R-Phils manager Dusty Wathan about several subjects. Read ahead for Wathan's quotes...


On who would be the starting pitcher for Reading, if the series reaches game 5-


On his confidence level in set-up man Tyler Knigge, who worked out of a jam in the 8th inning of game 1-

It's huge. One thing he had to work on to get to this level was his slider. He has to continue to work on it, and he has. I thought he was throwing the ball well last night. It was a situation where they didn't hit the ball hard the first couple singles they got, so he had a base open still and we're still in a player development mode, so we want to win, obviously, but for these guys to get the valuable innings they need in the playoffs, in a pressure packed situation, I think it's huge and I have all the confidence in the world in him and it's nice to see him get a strike out on a slider, a pitch that he's really worked on. That's an exciting thing to see, as a manager, watching a player develop like that.


On whether or not Eastern League MVP Darin Ruf has earned a spot with the Phillies as a September call-up, once Reading's season is through-

Well, he's definitely put his name in the conversation. There's a lot of talk about it. I haven't had any conversations about it with Ruben, or Benny, or Joe, but I am sure it's being discussed. That's all you can do as a player, is put your name on the map and make them talk about it. I think at the beginning of the year, if you had said Darin Ruf would be in the middle of this type of talk, I think a lot of people would say, "Well, who's Darin Ruf?" But he's done a nice job putting together the season he did, the month that he did and earning the fact that they're gonna talk about it.


On righty reliever Justin Friend, who was selected by the Phillies in the 2010 Rule 5 draft and posted a 2-0 record with a 0.23 ERA and 24 saves during the regular season with Reading-

He's been outstanding, obviously. He's perfect in save opportunities. I had him last year, for the first part of the year and he was outstanding. I trust him. When he comes in the game, I feel like it's pretty close to over...as close as you can get. He's a great guy to have on the team, not only on the field, but off the field. He's a real leader in the bullpen, a real leader in the clubhouse with the pitchers. He's just a real great addition to our organization. The team did a great job getting him in the Rule 5 draft. I love having him on the team, love being around him.

I feel hugely lucky (to have the lineup we have). I think with the trades that we made in July, to get Tommy (Joseph) and Ethan (Martin) and (Kyle) Simon, it's been huge. We are lucky to have a guy like Jake Fox and (Tug) Hulett around to be able to move guys like Joseph and Leandro Castro down in the order. There's not much of a hole in that order. Even Troy Hanzawa, who's hitting 9th for us, is a guy that hit .250 for us this year and had 40-something RBI's. If you look around this league, I don't think you're going to see many guys hitting 9th doing what he did offensively, not to mention his defense.

It's fun. Most of these guys have had an opportunity to play in the playoffs before, so they kind of know what it's about. I think the most fun part about the whole situation, like I tell these guys at the beginning of the year, is the more we win, the more recognition everybody's going to get. It's fun to have that core group, but having a new group to win it win is always exciting and really rewarding for an organization and a manager.
_______________________________________________